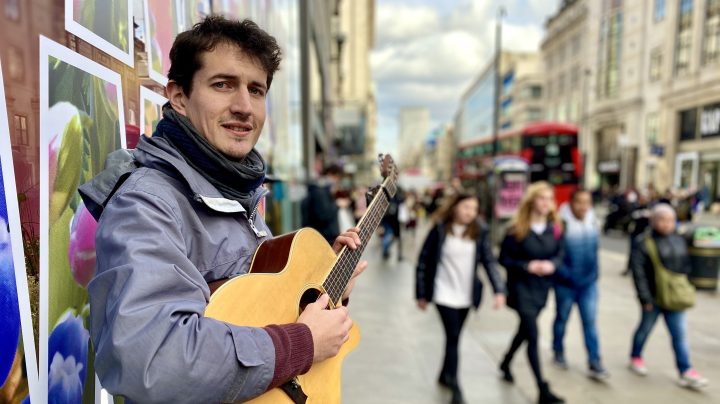 London’s street performers — the Brits call them “buskers” — are up in arms over a threat to their livelihoods. Their earnings have already taken a beating this year as the number of foreign visitors to the British capital has slumped by three-quarters. And now that the U.K. has entered a second pandemic lockdown, there will be fewer British visitors to the capital in the weeks ahead.

But the buskers are incensed for another reason. A local authority — Westminster City Council — is planning to curb street entertainment in the West End because, the council says, some of the buskers are noisy, anti-social, and in some cases, downright dangerous. The council is proposing to cut the number of sites where the buskers can perform, to impose a licensing and insurance system and to ban certain equipment that it regards as unsafe.

“I’m definitely in the firing line,” said Pete Kolofsky, who used to be a circus performer and now earns a living busking in Covent Garden, a trendy shopping precinct in London’s West End.

“I juggle knives at the beginning of my show, do tricks with a bull whip and then finish with a stunt called ‘The Sandwich of Death.’ I lie between two beds of nails and then get a member of the audience to stand on top for 10 seconds. If the council bans these so-called dangerous props, that would be the end of the line for me as a street performer,”  he said.

Kolofsky claims that he has never had an accident during one of his routines. Nick Broad, who runs an international advocacy organization for street performers called The Busking Project, insists there are no recorded cases of anybody being injured by a busker in London. Broad has branded the council’s proposals as “nonsensical, unwarranted and draconian.”

If enacted, the proposals will affect a much wider variety of street entertainers than just  knife jugglers, fire eaters and other circus performers. The number of busking sites would be cut to just 25 in the whole of the West End, and in only five of those sites would amplified music be allowed.

“A damaging and unnecessary restriction,” said Broad, “since we are talking about the largest, loudest parts of a very noisy city.” Broad also complains that under the new rules, buskers will only be permitted to perform for 40 minutes in every hour, will need a license and will have to take out $2.5 million worth of public liability insurance in case they injure passersby. “Why force a musician who is holding a guitar to get public liability insurance?” Broad asked. “This is nothing to do with public safety. This is just about making it difficult to perform.”

Fair enough. Musicians may not pose a physical threat to the general public. But doesn’t Westminster City Council have a point about the safety of the circus-type acts?

“No, it doesn’t,” countered Mark Rothman, a former street performer who busked in Covent Garden for 15 years and whose specialty was juggling three operating chainsaws.

“I don’t want to give the game away, but the chainsaw blades didn’t have any teeth. They were smooth. They wouldn’t cut anything,” he admitted. What’s more, the knife juggler’s knives are blunt and, thanks to weight distribution, the bed of nails routine is not as perilous as it looks.

“What we do isn’t dangerous,” Rothman said. “Although it does have to look dangerous, otherwise you can’t get a crowd. Now the council are banning anything that looks dangerous, which is insane,” he said.

Rothman claims that the streets of London should remain open as a sort of training ground for anyone with a talent to entertain, an outdoor theater where rookie performers can test their abilities on the public without bureaucratic interference. The training has certainly paid off in his case. He now runs the Top Secret Comedy Club on Drury Lane and owns a large house in north London.

“Everything I’ve made started from the streets,” he said. “I worked very hard on the streets, as many street performers do. It’s amazing what you can achieve if you’re given the opportunity. The streets gave me the opportunity to get on. ”

Westminster City Council did not respond to a Marketplace request for an interview but in a statement the council said, “We are not banning busking, but we deal with around 1,800 complaints a year over excessive noise and over-crowding caused by street entertainment. We simply want to strike the right balance.”

At least three organizations representing businesses in the West End have supported the council’s proposed crackdown. A spokesman for the Heart of London Business Alliance told Marketplace, “We don’t want to see the buskers eliminated. We just want proper regulation. We want to reduce the noise pollution.”

But the visitors and residents that Marketplace encountered on a brief visit to Covent Garden all sided with the buskers against the council.

“Haven’t they got enough important things to worry about other than busking? And talking about overcrowding, it’s just ridiculous. It brings people into the city. It’s what cities are all about,” said Elizabeth Wright.

“I think it should be allowed to go on as it is. It brings life to the city,” Edward Hughes chipped in.

And Lisa Bailey said, “It’s just a bit of fun, and obviously the buskers make a living out of it. I don’t think it necessarily needs to be restricted.”

With the U.K. once again in lockdown, the buskers are already bracing for another big hit to their earnings. But they fear that if the council crackdown goes ahead in the new year, hundreds of buskers will be out of work altogether. And they claim that they won’t be the only ones to suffer.

Correction (Nov. 10, 2020): A previous version of this story misspelled Pete Kolofsky’s name. The text has been corrected.