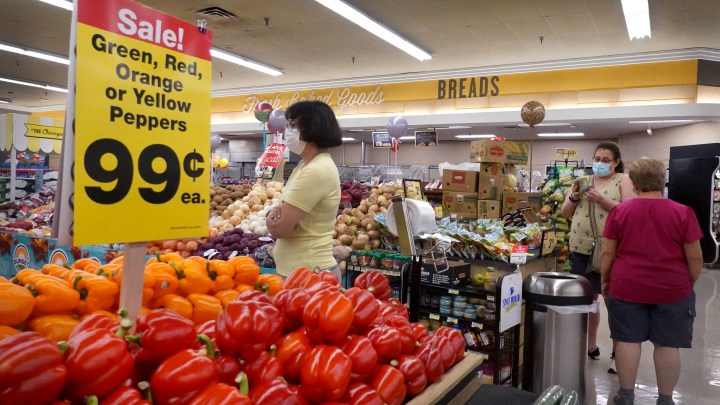 COPY
Prices for all items were up 5% year over year in May, per the latest consumer price index data. Scott Olson via Getty Images
Inflation

Prices for all items were up 5% year over year in May, per the latest consumer price index data. Scott Olson via Getty Images
Listen Now

Rising inflation—it seems like all anyone wants to talk, or worry, about right now, at least in the financial markets. The latest Consumer Price Index report showed prices for all items were up 5.0 percent year-over-year in May, with gasoline up 56 percent, used cars and trucks up 30 percent, and major appliances up 12 percent.

Federal Reserve Chair Jay Powell said at the end of the recent two-day FOMC meeting that monetary policymakers are seeing some rising inflation, mostly from “transitory supply effects” caused by the supply-chain disruptions of the pandemic itself, and consumers rushing in as the pandemic wanes to buy stuff and go places faster than businesses can deliver.

“There are a lot of risks, inflation could go higher,” said Claudia Sahm at the Jain Family Institute, who spent a decade as an economist at the Fed. “Federal Reserve officials—they see that prices have risen, they think there are going to be some big increases.” But she said they’ve also observed that so far price spikes are mostly concentrated in pandemic-impacted products and services like vehicles and appliances and travel. “And frankly over decades we have seen a very moderate pace of inflation, and the Federal Reserve is convinced that it is going to come back down.” (:11)

And that’s what most consumers think, too, according to new survey data from Morning Consult, said economist John Leer: “Consumers believe the prices of certain goods in pandemic-hit sectors are likely to increase more rapidly than other goods.” So right now, consumers expect trips and vacations and cars and home repairs to go up in price, less-so but items like furniture, or groceries, or rent.

John Burnham is 55, an automotive engineer in Batavia, Illinois, with one kid in college and another heading there next year. He’s trying to make sense of all the inflation news. “I’m very good at spending money, but my wife is even better at budgeting,” said Burnham. “I’m aware of the inflationary fears that some people might have: yeah, there might be inflation, no, I don’t think it’s going to be like the ‘70s.”

The family’s been saving for a new dryer, and a new car, he said. But with prices up so much right now: “If our minivan holds out for another year we may have to push that purchase out.”

People on a fixed or low- to moderate-income will start to cut back on any discretionary or optional spending if prices rise broadly and persistently in the future, said Mark Cohen, director of retail studies at Columbia Business School. “They spend money on things that they absolutely have to,” he said, “like driving to work, paying the rent or the mortgage or the electric bill, they buy the milk and the bread, they run out or anticipate running out, and they stop spending money on discretionary items.”

“Inflation hurts the wealthy,” she said. “It makes their savings less valuable, and it actually helps those who have debts–as long as their wages are growing–because when you pay it back, the money’s not worth as much.”