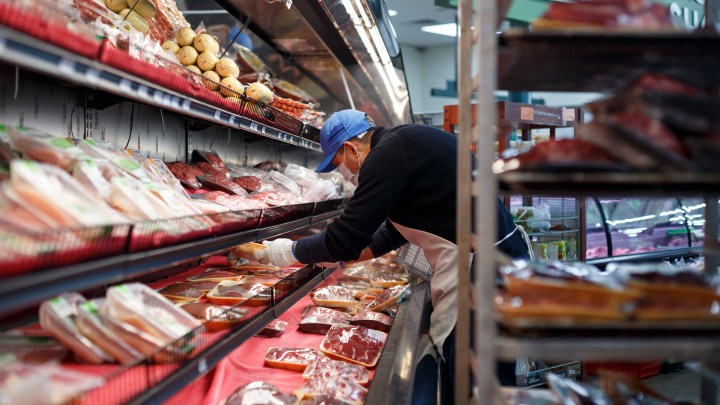 COPY
Food prices jumped about half a percent in May, mostly because of meat, poultry, fish and eggs. Elaine Cromie/Getty Images

Food prices jumped about half a percent in May, mostly because of meat, poultry, fish and eggs. Elaine Cromie/Getty Images
Listen Now

Consumer prices rose a little over half a percent in May, according to the Bureau of Labor Statistics. Over the last year, prices are up 5% — the biggest 12-month increase since August of 2008.

What’s unclear is whether the price hikes we’re seeing today are a short-term story or a long one — whether what the Federal Reserve calls “transitory” inflation is truly transitory.

We dug into one item in this report — food prices — to see what that tells us about why this is such an uncertain time.

Food prices jumped about half a percent in May, mostly because of meat, poultry, fish and eggs.

“People want protein, so the demand side is there,” said Glynn Tonsor at Kansas State University. Tonsor has been researching consumers’ expectations on what they’ll pay for ribeye, ground beef, pork chops and bacon. And he’s found that consumers think prices will rise more, so they’re loading up.

“And that in itself is going to lead to some higher prices,” Tonsor said.

What’s uncertain is whether prices are only rising because of short-term issues — like supply bottlenecks and the fact that things are reopening — or whether prices will keep rising.

“So that suggests that there is some staying power,” she said.

This is also happening while the food industry is paying higher wages to attract labor. As a result, House said, “Both groceries and restaurants, who work on very thin margins, are going to have to raise prices further.”

It’s too early to say whether this will throw a wrench into the economic recovery, said George Pearkes at Bespoke Investment Group. He said there are reasons to think that food prices will stabilize in the long term.

“When you see high prices for a long time, you tend to see farmers go out and plant a lot more,” he said.

Overall, Pearkes said it’s unlikely that inflation will hit a point where policymakers need to step in.