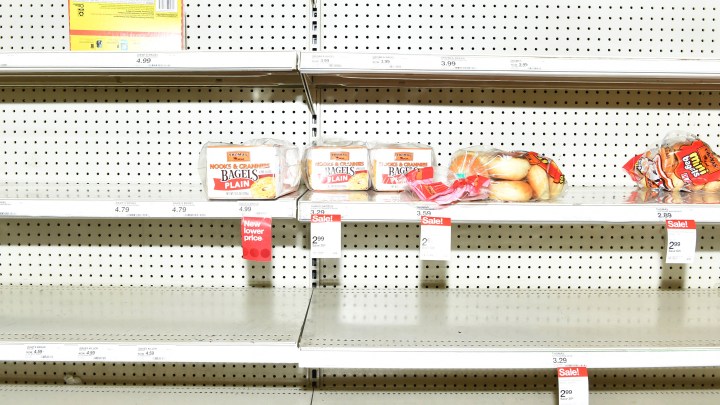 One reason for the price hikes Americans are seeing is product shortages. Some things are scarce — electronics and appliances, furniture, for instance. So what happens to consumer spending when customers can’t find what they want?

Last year, Kristen Nelson’s gas stove broke, so she ordered a new one — this time, with an induction cooktop.

“It’s the one that uses magnets,” she said.

She was trying to be environmentally conscious. She bought it in September.

“And I was told it would come in November, and I was like, ‘Ah, I guess I can do two months. It’ll be OK,'” Nelson said. “And every month, I got a message that said it was coming later and later.”

She ate a lot of salad and microwaved eggs. The stove arrived in March. If she’d known it was going to take that long, she would’ve looked at other options.

When retailers don’t have the product you want, you have a choice to make: wait, change your plans or buy something else.

Marc Iampieri, managing director at the consulting firm AlixPartners, said retailers are thinking about that “buy something else” part as they buy inventory. They want to be able to say, “OK, we don’t have the bike your kid wants, but how about a scooter? Or a hoverboard?”

“You can, you know, supplement your assortment with products like that that maybe aren’t the first choice,” he said.

Iampieri said customers are often willing to consider different brands and styles if it’s a time-sensitive purchase, like if the fridge breaks. Or even if they want patio furniture, and it’s June, so clock’s ticking.

“In some cases, they have to be willing to switch between style, or they’re going to miss the season,” Iampieri said.

The other element here is price.

Even if people find what they want, the fact that there’s a shortage will likely make it more expensive. And that can push them to buy something cheaper or not buy at all.