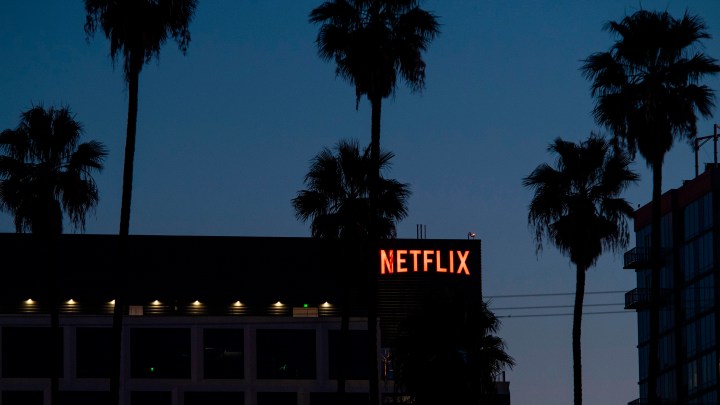 The Netflix logo is seen on top of its Hollywood office building in February 2021. Spread of the delta variant could boost the fortunes of companies like Peloton, DoorDash and Netflix, experts say. Valerie Macon/AFP via Getty Images
COVID-19

The Netflix logo is seen on top of its Hollywood office building in February 2021. Spread of the delta variant could boost the fortunes of companies like Peloton, DoorDash and Netflix, experts say. Valerie Macon/AFP via Getty Images

Consumer spending numbers came out Friday morning and showed a slowdown in growth — increasing .3% in July compared to more than 1% in June.

That may have something to do with another consumer sentiment. That number, tabulated by the University of Michigan every month, fell to a near-decade low because of the delta variant, which has dashed people’s hopes that the end of this pandemic is near.

What do those numbers tell us about the economic outlook for those businesses that have flourished in the pandemic and those that haven’t?

For a glorious few months, Sarah Garlitz in Pennsylvania felt like she could breathe easy.

“I would go into stores without masks and I would even let my son do it. But that has definitely backtracked in the past couple weeks,” Garlitz said.

Worried about the delta variant, she cancelled a road trip she planned with her father, is working from home more often and is doing early morning grocery shopping again.

There’s also data to support anecdotes from people, feeling hesitant, who have canceled gym memberships and travel to work conferences.

OpenTable reservations have been declining since June. Southwest Airlines recently said bookings have dropped and cancellations have increased. And then there are those softening consumer spending numbers.

“The delta variant creates some significant risks for what happens to overall spending over the next couple of months,” said Wendy Edelberg, an economist at The Brookings Institution.

If people stay home again, demand for services could dip, she said — and demand for goods could flatten. After all, how many more home improvement projects can people really pick up?

And the fortunes of companies like Peloton, DoorDash and Netflix could rise, according to Carlos Torelli, a marketing professor at the University of Illinois at Urbana-Champaign.

“Consumption on the go, as you please, in bit — it, for a generation, is becoming more the norm. And there’s where you start seeing changes,” Torelli said.

That may give these companies a more permanent place in our everyday lives. Torelli himself is working in person, though still doing meetings on Zoom.

“I don’t have to be moving from one office to another, sometimes in different buildings. So you can pack more meetings,” he said.