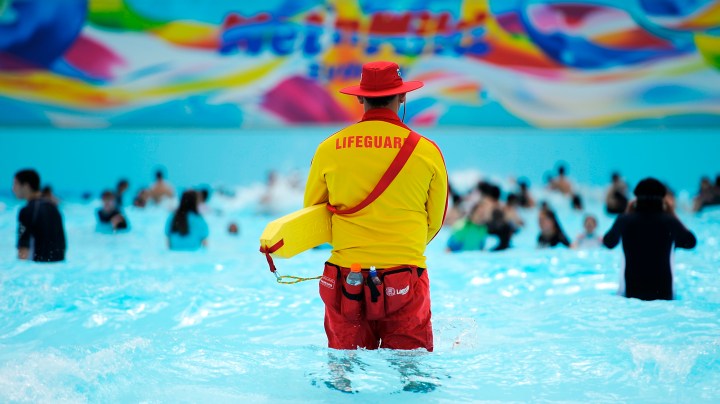 COPY
A lot of lifeguard training was put on hold during the pandemic. Brett Hemmings/Getty Images

A lot of lifeguard training was put on hold during the pandemic. Brett Hemmings/Getty Images
Listen Now

You’ve probably seen the help wanted signs everywhere. Businesses are trying to staff up as COVID-19 restrictions are lifted. One consequence: Many swimming pools across the country won’t open this summer or will have reduced hours because of a shortage of lifeguards.

AAA Pool Services in Virginia Beach manages about 50 swimming pools, and that takes a lot of lifeguards, said vice president Jim Durkee. “Normally we have anywhere from 200 to 250 on staff. Right now we’re sitting at about 75.”

So he’s rotating people, keeping just a third of the pools open at once a week at a time and giving clients credit or refunds for the weeks pools are closed.

Durkee said there are many reasons for the shortage. One is that “a lot of the kids and lifeguards that we’ve employed in the past that basically had the last year of their life ripped away from them. And a lot of them say, ‘Hey, I want to have a normal summer before I go back to school in the fall.’ “

There’s also a backlog in the processing of temporary J-1 work visas that often brought in summer workers from abroad to fill jobs.

Sabeena Hickman, who runs the Pool and Hot Tub Alliance, an industry group, said COVID-19 travel restrictions limited who could enter the country, and “embassies were shut down. People weren’t in the office processing the visas. So I think that’s more of the leading factor.”

Plus, a lot of lifeguard training was put on hold during the pandemic, according to Wyatt Werneth of the American Lifeguard Association. “We’re starting some of the trainings now. But we’re also seeing not as many people showing up for the tryouts as normal.”

Another reason for the shortage? A lot of people just can’t swim very well.

“We’re at a point where we might be able to get 20 or 30 people into a training class that want to work as a lifeguard, and only two or three of them can pass or swim test,” said Jim Tarantino, director of recreation for Milwaukee County Parks, which is only opening four of its 12 pools this summer because of lifeguard staffing.

To Tarantino, the shortage is a safety issue. He can close pools, but that doesn’t help on public beaches like on the shores of Lake Michigan. Tarantino said there are rip tides, and some people drowned last year at unguarded beaches.

Tarantino said there needs to be more emphasis on swimming education at a young age to feed the pipeline for lifeguards later on.