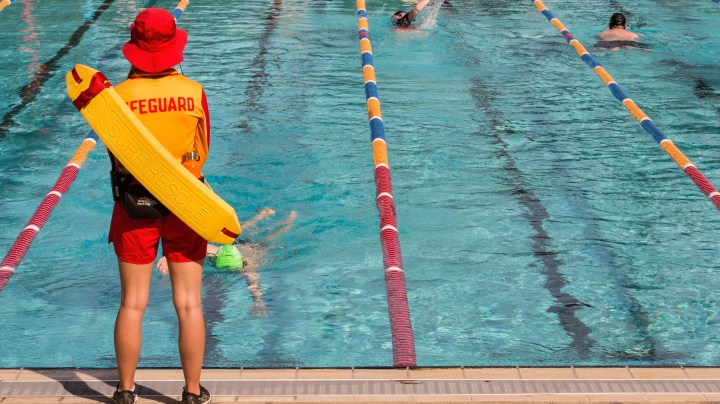 COPY
The American Lifeguard Association warns that a third of U.S. public pools could remain closed this summer due to staffing shortages. Darrian Traynor/Getty Images

The American Lifeguard Association warns that a third of U.S. public pools could remain closed this summer due to staffing shortages. Darrian Traynor/Getty Images
Listen Now

The labor shortage has hit leisure and hospitality particularly hard, with demand expected to bounce back even more this summer. That’s made hiring for summer jobs even more challenging and created the hottest job market for teenagers in more than a decade.

As the first vaccinated summer for school-age kids approaches, singalongs and s’mores are coming back in full force, said Tom Rosenberg, president and CEO of the American Camp Association.

“This summer, we need all of these young adults, we need them all to help come and work for a summer camp, have a great time, learn,” he said.

Many camps started recruiting last fall, Rosenberg said, but there are still about 1,800 job openings listed on the American Camp Association site.

In the Columbus, Ohio, suburb of Hilliard, Anastasia Bradley is searching for dozens of lifeguards to staff community pools.

“We went out to almost all of the high schools and took some treats with us that had a sticker with a QR code on it that led directly to the application,” Bradley said. “We have actually offered open interviews, which we have never done before.”

The American Lifeguard Association warns that a third of public pools nationally could remain closed this summer due to staffing shortages.

Teens are looking for work, said Julia Pollak, a labor economist at the job site ZipRecruiter, but many have taken better-paying, full-time jobs that once went to more experienced candidates.

“Many teenagers have seen their friends get the kinds of jobs that are allowing them to buy a car within the first month, so their expectations have been raised,” she said.

Quit rates are still high and labor force participation is still down among most age groups — except for teens, according to Liz Wilke, principal economist at human resource platform Gusto.

“What’s happening, as a result, is that the share of hiring for the summer that’s being taken up by teen employment has been increasing year over year, and we’re really seeing it start to spike now,” Wilke said.

Four years ago, she said, teens made up just 2% of hires. This year, they’re almost 10% — even as much as 27% in industries like food and beverage.

“This is going to be the best summer for kids, certainly going back to 2000,” said Paul Harrington, who directs the Center for Labor Markets and Policy at Drexel University, which releases annual reports on the job outlook for teenagers.

But there’s still room for more growth, he added. For decades before 2000, almost half of all teens worked. But over the last 20 years, even in hot job markets like today, the rate tops out around a third.