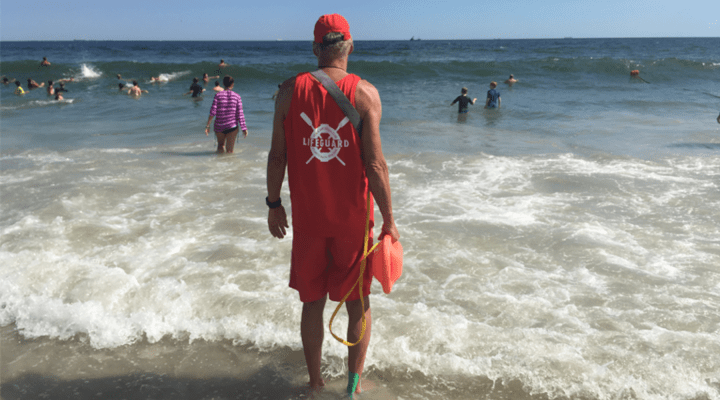 COPY
Roy Lester at work at the Sun and Surf Club. Sally Herships

If it was someone’s job to save your life, a doctor, firefighter or police officer, you would want them to have experience with the task at hand. But there’s a difference between knowledge and the ability to follow through. The federal government is clear on the distinction. It allows employers to set requirements outlining physical requirements of a job. But the dividing line can be hazy and it’s at the heart of a lawsuit in New York.

When Labor Day weekend hits, it signals a change in some workplaces. Kids are headed back to school and older kids to college. Which means that any summer jobs they were holding down have come to an end. One place you can see the change clearly is the beach — many of which are still open. Just conjure up the shoreline in your imagination. (If you’re in the tropics, sorry, the beach we’re heading to is in New York — Long Island to be exact.)  The sun is warm, the beach towels are colorful and kids are playing  in the surf. Now add in some lifeguards.

Roy Lester’s co-workers at the Sun and Surf Club.

But let’s be honest. Think lifeguard and it’s easy to fall into the trap of stereotype. A kind of a “Baywatch” thing — tan, white teeth and orange bathing suit. And young. But this isn’t always the case at Jones Beach. The lifeguards there tend to stick around. There’s even a documentary about them called “The Jones Beach Boys.”  At Jones Beach, some of the “boys” wear dentures. Lifeguards there can work into their 70s. And in New York, this proud tradition of older guards coming back year after year is causing problems.

Roy Lester, 66, was a Jones Beach lifeguard for about 40 years. He’s also a lawyer and he’s suing, accusing the New York state parks department of age discrimination. The case is complicated; it hinges on bathing suits. Like one style called a jammer, which looks like a Lycra bike short. Jammers are supposed to help swimmers go faster. But how much exactly is in question.

“It’s just a feeling that you go through the water smoother,” Lester said.

Older lifeguards, he noted, often wore jammers when they took the annual swimming test needed to requalify for the job. But in 2007, the state banned the suits. Lester could have taken the test in an approved suit, but he refused, so he couldn’t return to his job at Jones Beach. It wasn’t that he was worried about the test. A nationally ranked triathlete, “I knew I could pass it in my jeans,” he said. At its heart, Lester said, the ban was about discrimination, about trying to push out the older guys.

“These new swimsuits came out, they were being touted in the Olympics. So these guys, psychologically, when you’re taking this rehire test, you look for every advantage. Because unlike anything else in the world, if you fail this test twice, you’re done. Your career is done,” he said. “They wanted to make it as difficult as possible for the older guys to continue life guarding.”

This is a lawsuit. There’s argument about a lot of detail. There are thousands of miles of beach in the U.S. and rules for lifeguards vary. And what makes the case even more complicated is that proving age discrimination can be difficult.

“There are statistics that show most plaintiffs lose employment discrimination claims in general,” said Joseph Fishkin, a visiting professor of law at Yale Law School. One of the difficulties, he said, is that a plaintiff must prove that the motivation behind a employer’s requirement, like a timed swimming test or a banned bathing suit, is discriminatory, rather than reflective of a reality of the job. On its own, he said, requiring a lifeguard to wear one style of suit over another would be difficult to cast as age discrimination.

“Isn’t it good to try to make sure that you have fit lifeguards to be able to actually rescue people and all that kind of stuff? Isn’t that what you’d want the parks department to be doing?” Fishkin asks.

It comes back to motivation.

“It all depends why they did it,” Fishkin said. “What the law says you can’t do is make sure your lifeguards are fit by getting rid of the older ones.”

But not all lifeguards agree that pushing out older workers is what’s going on. Chris Brewster, a retired lifeguard chief from San Diego and a liason officer with the United States Life Saving Association, called Lester’s lawsuit “silly.”

“I am gobsmacked at the rationale behind this lawsuit,” he said. “It seems clear to me that he could have passed the test. Had he just worn the required shorts, and he’d still be working as a Jones Beach lifeguard. And I’m sad for him, that he threw away that opportunity. I think there are a lot of lifeguards who look at his situation and wonder why he threw away the opportunity to be a lifeguard at Jones Beach, which is a storied beach nationwide, over a dispute about a pair of trunks.”

Contrary to the idea of Jones Beach trying to oust older workers, Brewster said, its union has been effective at representing them.

“The idea that we pulled out Jones Beach as an example of how older lifeguards are poorly treated is really ironic,” he said. “Because I think they have probably the oldest beach lifeguard core in the United States. So if the administration has been trying to cull the number of older lifeguards, they’ve been pretty ineffective at it.”

In 2005, the parks department issued a memo. It mentions the age of some lifeguards in their 60s and 70s. The memo said:

“At Field #6, the last weekend of the season, the average age of lifeguards working there is 65 years old and three out of the ten were over 70 years old. If it had been a busy weekend, this could raise serious safety issues for, not only the public, but for the staff on duty.”

The New York state attorney general’s office, which is representing the parks department, had no comment.

For now, Lester continues to work as a lifeguard at a private Long Island club, the Sun and Surf. When speaking about his old employer he sounds both bitter and wistful.

“I gave them almost 40 years of my life. I was exemplary. I won national championships as a lifeguard,” Lester said. “I can pass the test. “