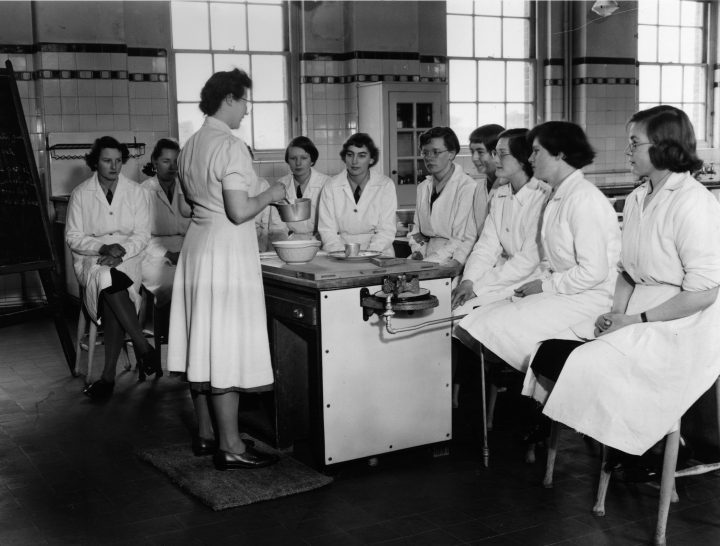 COPY
A home economics lesson in 1953. In a new book on the history of home economics, author Danielle Dreilinger writes about how the profession created a “back door” for women in science, business, and engineering. Photo by Harrison/Topical Press Agency/Getty Images
Shelf Life

A home economics lesson in 1953. In a new book on the history of home economics, author Danielle Dreilinger writes about how the profession created a “back door” for women in science, business, and engineering. Photo by Harrison/Topical Press Agency/Getty Images
Listen Now

The age of coronavirus brought renewed attention to the work of running a household. Stories about a resurgence of cooking and sewing flooded the media, and domestic labor has become part of the national conversation about infrastructure.

In her new book, “The Secret History of Home Economics: How Trailblazing Women Harnessed the Power of Home and Changed the Way We Live,” independent journalist Danielle Dreilinger writes that the founders of “home economics”— a class you may have taken in middle school — were some of the first people to recognize the economic value of such housework.

Click the audio player above to hear Dreilinger’s conversation with “Marketplace” host Kai Ryssdal. The following is an excerpt from the book.

Everything You Know About Home Economics Is Wrong

When you imagine the founder of home economics, who do you see? Betty Crocker, Donna Reed? A white man with a handlebar moustache glaring at women to stay in their place? A stern, conservative lady teacher with 1950s glasses, teaching girls how to do housework — someone like Dolores Umbridge, only less evil?

Try a white female chemist, Ellen Swallow Richards, the first woman to attend MIT, who believed fervently in the power of science to free women from “drudgery.” “My life is to be one of active fighting,” she wrote. Try a famous Black woman, Margaret Murray Washington, who thought that improving the home could end racial inequality.

That’s all you need to know to realize that everything you thought about home economics is wrong. Home economics was far more than baking lumpy blueberry muffins, sewing throw pillows, or lugging a bag of flour around in a baby sling to learn the perils of parenting. In its purest form, home economics was about changing the world through the household.

Home economists instructed and inspired waves of women who built science careers helping people live better lives. Together, they built an empire of jobs and influence. They originated the food groups, the federal poverty level, the consumer protection movement, clothing care labels, school lunch, the discipline of women’s studies, and the Rice Krispies Treat. They were the first to measure the economic value of housework and the amount of physical effort it took. They enabled millions of people around the world to survive harrowing deprivation. They had the ear of presidents and first ladies and queens. They helped win wars. Their work operated in as large a sphere as battlefields and on as intimate a scale as counting calories. All done with pragmatic empiricism, with an eye on careers. Home economists created tens of thousands of jobs — not just in high school classrooms but in labs, colleges, government agencies, and business departments. For decades, there was always a job for a home economist. For decades, the profession was even respected.

Through home economics, Gladys Gary Vaughn went from segregated Florida to a doctoral degree and a career that included the civil rights office of the US Department of Agriculture and the presidency of a major international volunteer organization. “The nation has benefited. They have laughed at it. But they have benefited,” she said.

Home economics has been a back door for women to enter science; part of a surprisingly large government-backed movement; a guilt trip for women left cold by the household arts; a trapdoor or a springboard for women of color; a sometimes ironic, sometimes nostalgic preoccupation of third-wave feminists; a conservative calling card; an aesthetic obsession for the Instagram set; a feminist battlefield; and the locus for countless anxieties about women’s lives.

A revival seems bewilderingly overdue. The last twenty years have seen countless DIY homemaking blogs, the Food Network and Project Runway, Instagram and Pinterest, ecofriendly slow fashion and knitted pussyhats. We live amid high-pressure parenting, financial and environmental crises, the return of vo-tech education, stress over “adulting,” and women still doing the lion’s share of home labor. In response to a global pandemic, people stripped supermarkets of flour and big-box stores of sewing machines. Why hasn’t home economics come back? Practitioners will tell you: because it never went away. Though most people think it went the way of the eight-track, home economics is, though diminished, still here.