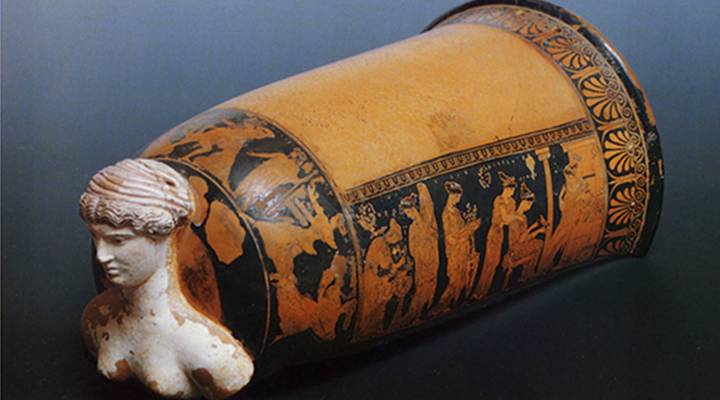 COPY
This epinetron, a form of pottery that women wore on their thighs during their preparation of wool, highlights a key feature of Athenian women's economic contribution to their households: textile production. Courtesy of Ellen Millender

This epinetron, a form of pottery that women wore on their thighs during their preparation of wool, highlights a key feature of Athenian women's economic contribution to their households: textile production. Courtesy of Ellen Millender
Listen Now

When it comes to economics, it’s easy to get caught up in big ideas: Money, the markets, trade, labor and more.

Now, believe it or not, the study of these ideas can all be traced back to one guy in ancient Greece — a mercenary who lay down his weapons, thought long and hard about household management and then wrote a text about it.

So let’s take a look backward to where the original idea of economics came from and why that’s important today.

Xenophon was the author of the “Oeconomicus,” a Socratic dialogue that focuses on household management. Evidence for this author’s life comes from his own works and the early third-century CE biography written by Diogenes Laertius. Xenophon was born in Athens circa 430-425 BCE to a wealthy family and at some point became a student of Socrates. He left Athens in 401 to serve in the army of Greek mercenaries (the 10,000) that supported Cyrus the Younger, who aimed to take the Persian throne from his brother Artaxerxes II. After Cyrus died at the battle of Cunaxa in 401, and most of the original Greek generals were murdered soon thereafter, Xenophon was instrumental in leading the 10,000 from Persia back to the Greek world — a perilous journey that he recounts in his famous work, the “Anabasis.” Later in the 390s, Xenophon met and served with the Spartan King Agesilaus II, and it is likely that both his support for Cyrus and his involvement with the Spartans earned him a sentence of exile at the hands of his fellow Athenians in late 395/4 or early in 394/3. After living on an estate that the Spartans provided for him, Xenophon likely moved to Corinth and may even have returned to Athens if and when the Athenians rescinded their decree of banishment. It appears that he died at the end of 356, having led a uniquely varied life as an Athenian citizen-soldier, a mercenary under a Persian prince, a close associate of a powerful Spartan king and an exile. The wide-ranging nature of his experience helps to explain the extraordinarily diverse nature of his corpus, which included several other Socratic dialogues, a historical account of Greece from 411 to 362 BCE (the “Hellenica”), an account of Spartan government and institutions, and short treatises on horsemanship and hunting.

2. Xenophon’s “Oeconomicus,” the book that started it all

The oikos (“household”), the basic unit of Greek society, encompassed the members of the family, along with their dwelling, slaves, animals and everything else that the household utilized, produced and consumed. Although the oikosnaturally featured prominently in Greek literature, Xenophon’s “Oeconomicus” is the earliest surviving Greek work that focuses on the household and the practices involved in household management. In this work, moreover, Xenophon talks in detail about so many issues that receive little or no attention in other texts — the relationship between husbands and wives as well as masters and slaves, the education of wives and slaves, and the technology involved in farming, which he treats as the noblest of occupations. Scholars have traditionally argued that Xenophon, like his fellow Greeks, was ignorant of economic theory and that his “Oeconomicus,” accordingly, neither reflects economic principles nor contains economic analysis. Recent studies, however, have challenged this view and have rightly emphasized the importance of Xenophon’s focus on the domestic sphere and recognition of the contributions that both women and slaves made to Athens’ economy.

3. The Athenian economy, and how one made a living

The majority of Athenian males earned their living through agriculture and viewed farming as the most noble and appropriate occupation for free males. Fifth-century Athens, granted, enjoyed an unusually complex economy in the Greek world, as its naval empire and democracy together contributed to the development of manufacturing, trade, retail and associated economic activities primarily located in Athens’ major port of Piraeus. In order to benefit from Athens’ position as a Greek economic and cultural center, Greeks from other regions migrated to Athens, where they established themselves as resident aliens, known as metics. They constituted a large part of the population, and at one point were almost equal in number to adult male citizens, who numbered about 45,000 at the height of Athenian prosperity before the Peloponnesian War (431-404 BCE). Even though their empire created numerous ways in which to earn a living, Athens’ citizens generally believed that farming was far preferable to working as a craftsman or working for another. As Xenophon’s “Oeconomicus” makes clear, Athenians viewed farming as the proper activity for free males because they looked upon work outdoors as more masculine than manufacturing work, which took place indoors under someone else’s direction and was thus considered more appropriate for women and slaves. Indeed, as Aristotle makes clear, one essential condition of earning a living that preserved a citizen’s status and sense of identity was to be in charge of ones’ own farm, business and person (Rhet. 1367a32-3): “Among the things that are honorable is not working in any vulgar craft; for it is the condition of a free man not to live for the benefit of another.”

4. Athenian slavery, and how economic exploitation was part and parcel of the empire

Athens’ economy, in fact its entire society, depended on the exploitation of slaves, the majority of whom were probably non-Greek. Three basic mechanisms provided foreign slaves for slave traders and markets: war, piracy and direct trade with countries where captive, surplus or subordinate populations were regularly sold. Athenian slave holding was probably at its highest during the most prosperous years of Athens’ empire, in the middle of the fifth century BCE. Slaves might have made up anything between about 15 percent to 35 percent of the total population, depending on which modern estimate one accepts. While the extent of slave owning probably varied considerably over time, many scholars today favor a figure of around 100,000 slaves, a proportion of roughly one to three in relation to the population as a whole, or an average of three or four slaves per household during the height of Athens’ power. Whether or not most ordinary Athenian peasant-farmers owned slaves at some time in their lives, slave ownership was universally regarded as highly desirable and necessary for the preservation of the freedom and citizenship status that the Athenians so jealously guarded.

In Athens, slaves operated throughout the Athenian economy —  in agriculture, a variety of domestic settings, mining, manufacturing, building, trade and banking. Although it might surprise modern readers, the great majority of workers involved in Athenian banking at every level appear to have been slaves, probably because money handling was traditionally a despised profession and involved a subordination to others that was incompatible with Athenian citizen status. Slaves also were extensively involved in the interconnected areas of prostitution and entertainment, activities considered wholly inappropriate for free citizen males and the females under their guardianship. Finally, the Athenian state was also a large employer of slaves, who functioned, among other things, as the keepers of archives, clerks, assistants to Athens’ governing bodies and the managers of coins, weights, and measures. Perhaps more surprising are Athens’ “Scythian archers,” those slaves whom the Athenians employed to maintain order in public meetings and public places.

This pyxis, a round lidded box used to hold cosmetics or jewelry, shows scenes in the interior of a home, identified by the large, studded entrance.

5. Women in Athens, and how the exploitation of female labor was part and parcel of the economy

Athenian society depended on the economic exploitation not only of slaves but also of women. Despite its idealized picture of the Athenian oikos and its highly unusual valuation of women’s labor within the household, Xenophon’s “Oeconomicus” still presumes a patriarchal system in which the male head of the household appropriated the labor of his wife and other females under his control. As Xenophon suggests in his account of the marriage of an Athenian gentleman named Ischomachus, Athenians girls generally were married for the first time between the ages of 14 and 18 — with evidence pointing to the lower end of this range — to males who were approximately 30 years old. After entering their husbands’ households, Athenian girls, if we are to believe Xenophon, contributed to the economic health of their new homes through their dowries and their work, which included everything from textile production to the training and supervision of slaves and the organization and storage of the goods procured by their husbands.

Even though Athenian women were entirely excluded from the political process, their roles in the domestic sphere had important consequences for their menfolks’ roles in the public realm. Athenian women served as vital links in the ties of kinship and religion that united individual Athenian households and bound together the community of Athenian citizens through their production of legitimate sons and heirs for their husbands’ households and their transmission of wealth both within and among households. The enactment of Pericles’ citizenship law of 451/0 BCE, which mandated that the male Athenian citizen’s father had to be a citizen and his mother had to be the daughter of a citizen, also made women key in the transmission of citizenship and all of its perquisites to their sons.