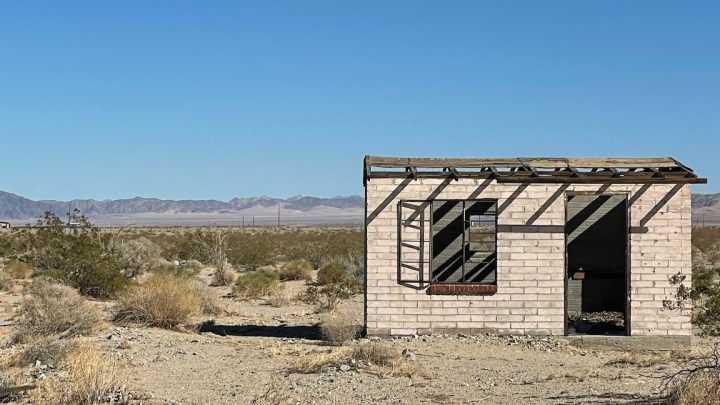 COPY
An abandoned homestead structure in Wonder Valley. People who migrate from the city to the desert may have to deal with a lack of services, including municipal water. Benjamin Gottlieb

An abandoned homestead structure in Wonder Valley. People who migrate from the city to the desert may have to deal with a lack of services, including municipal water. Benjamin Gottlieb
Listen Now

Craig Higgins has lived and worked in big cities all over the world: New York, Seattle, London, Paris. But he moved — most recently from Los Angeles — and bought his dream home in an unlikely place: the middle of the desert.

“Every property I looked at sold within two days above asking price so I knew something was going on here,” he said.

“Here” is Wonder Valley, about 2½ hours from Los Angeles. Population below 1,000.

Eventually, Higgins said, he got lucky and bought a small home directly from its owner, in an all-cash deal, for just under $50,000. That total is a far cry from Los Angeles County’s sizzling real estate market, where the median home price is more than $700,000. That’s according to the financial-services company CoreLogic.

“I’m too busy. Like I have too much to do,” said Rob Grace, a real estate agent who specializes in desert living. “Because the price point is so low, compared to the rest of California, Southern California, a lot of people [are] all cash, and people are willing to forgo appraisals and go way over asking price,” he said.

This red-hot market isn’t just good for agents but also for homeowners who recently moved out to the high desert, like Jess Madison, who also lives in Wonder Valley. “I bought this place as an Airbnb, and that was in 2019. Luckily, because it would be twice as expensive right now,” she said.

Wonder Valley is arid and sparsely populated, so it helps that Madison is able to work from home as a writer.

“I think that’s one of the reasons people are moving out here so much more. Since the pandemic happened, everyone has been remote working,” she said.

But there are people who’ve lived here for decades, like Laronda Jordan. And they’re starting to have questions about what all this change might mean for them. She bought her house in 2003 for $84,000. Her house is fully paid for, but it needs repairs.

Jordan lives with her daughter and two great-grandchildren on 5 acres. This property — like most others in Wonder Valley — began as a homestead: land the federal government gave away for free, especially in the ’50s, as long as people built something on the property.

“Most of my roof has blown off … so it’s kind of a tossup between the roof, the water and the electric,” Jordan said.

Jordan’s property is now worth close to $250,000, according to an estimate by the real estate firm Redfin. But Jordan said that increase in value hasn’t helped her family. She doesn’t plan to sell, and, while she could refinance, she said she couldn’t make the payments. At 70 years old, her only income is her widow’s Social Security, which is about $1,300 a month.

“It’s tight. That’s why there’s not much of a roof on the house,” she said.

Another big problem: water. There’s no municipal system in this part of the desert. Jordan gets water from a well, but the groundwater supply is limited and Jordan said she is worried about how long her well will last.

Jordan said she gets why someone would want to live out here. There’s a freedom in the desert you just can’t replicate in a city.

But with all the change, she’s not sure if her way of life can last much longer.