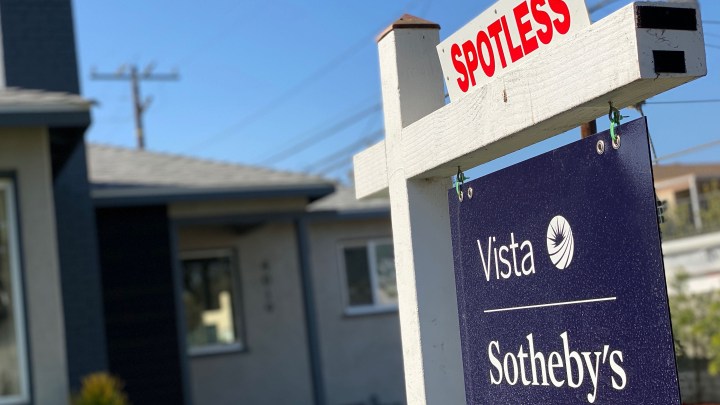 COPY
Big brokerages, like Compass and Realogy, have been on a tear to to buy up their competitors, along with their agents, and expand their range of business. Chris Delmas/AFP via Getty Images

Big brokerages, like Compass and Realogy, have been on a tear to to buy up their competitors, along with their agents, and expand their range of business. Chris Delmas/AFP via Getty Images
Listen Now

Compass, one of the country’s fastest-growing real estate brokerages, reported quarterly results this week for the first time since it became a public company. Sales and market share are up, but profit … not so much. Which was expected: It’s a spend-money-to-make-money time for Compass.

Big brokerages like Compass and Realogy have been on a tear to buy up their competitors, as well as those competitors’ agents, and expand their range of business. Would-be home buyers aren’t the only ones competing for more real estate in this hot housing market.

And each of those transactions typically generates a 6% commission, split between the buyer’s and seller’s agents, plus title insurance, escrow and other closing costs.

“There’s really this kind of smorgasbord of fees throughout the housing food chain,” Palacios said. “I think a lot of these companies are trying to become these kind of one-stop shops to capture that.”

That’s why Realogy, which owns the brands Coldwell Banker, Century 21 and Sotheby’s, has been expanding its mortgage and title business. Compass has also been bulking up its real estate services.

Then there’s the competition for talent. Since it was founded in 2012, Compass has expanded to more than 19,000 agents through aggressive recruiting and acquisitions.

“It’s been somewhat of a feeding frenzy competing for the best of the best agents, because you immediately have a Rolodex of transaction potential,” Palacios said.

The bigger the brokerage, the better its chances of doing business on both sides of the deal. In a seller’s market like the one we’re seeing right now, “if you have a listing, you’re going to get a sale,” said Ralph McLaughlin, chief economist at real estate finance company Haus.

“If you’re representing a buyer, there’s a chance that it’s going to take several months for them to close that deal and get you that commission,” McLaughlin said. According to the National Association of Realtors, the country has more real estate agents right now than homes for sale.

Correction (May 14, 2021): A previous version of this web story incorrectly described Rick Palacios Jr.’s forecast for home sales transactions. The text has been corrected.