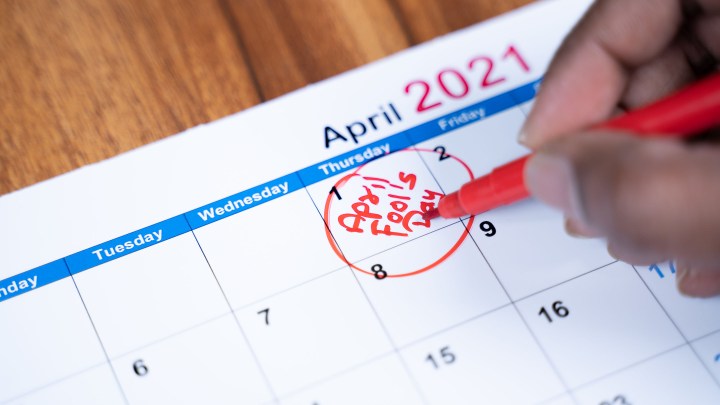 Before you fall for any new product announcements, check the calendar. Instagram and Facebook feeds are brimming with April Fools’ Day fodder: Beer from a spray can, spaghetti-flavored IPA, gin-pickled cucumbers — you get the idea.

In the past, April 1 has been a treasure trove for journalists looking for some lighthearted stories to make audiences smile. But, with growing distrust in the media industry, and a pandemic crossing into its second year, the jokes might not hit like they used to.

Earlier this week, German automaker Volkswagen captured headlines for an early April Fools’ joke gone wrong. A press release said it planned to rebrand the company’s U.S. unit to “Voltswagen” in a bid to highlight its commitment to a greener future with its electric vehicle range.

It’s the context of the joke that makes all the difference, according to International Marketing Partners CEO Allyson Stewart-Allen.

Below is an edited version of her conversation with the BBC’s Victoria Craig on the global edition of “Marketplace Morning Report.”

Stewart-Allen: There is a right way, one being Burger King with the “Chocolate Whopper,” [which Burger King is actually selling.] It’s all about context. And that’s why it’s so important for the marketing and the company leaders to sense the environment and know when it’s the right time to do such a thing.

Craig: And as part of the trick here, making it so that it’s believable, but still, I guess more unbelievable?

Stewart-Allen: Yes, the reason the Volkswagen campaign was such a disaster is exactly because the business press has been reporting for some time that Volkswagen is looking at investing in and launching all-electric vehicles for the foreseeable future, and that the company sees its future in that realm. So it wasn’t a huge departure to think that the company could feasibly rebrand to Voltswagen. And the other bigger part of the problem for the company is the timing. So the fact that it wasn’t timed appropriately to coincide with April Fools’ Day is what led both consumers and investors around the world to think that this was a legitimate change of corporate name, so it missed the mark on all counts.

Craig: And you mentioned shareholders there. It’s sort of all fun and games until financial regulators come knocking isn’t it? Depending on how far a brand goes with their April Fools’ prank, they could be in trouble for things like market manipulation and things like that, can’t they?

Stewart-Allen: Yes, companies definitely can get in trouble. So we saw with the Voltswagen mishap that American depository receipts climbed 12.5%. And of course, this has caught the attention, rightly, of the SEC. But it’s not just in the United States that this is a concern with Volkswagen’s perceived market manipulation. So regulators here in Europe, in the U.K., are paying attention. And in the end, this company, while it thought it was being clever and cute, it comes at a very hefty price.

Craig: There’s been so much talk of distrust in the media over the last several years. Do you think these sorts of stunts, even if they’re done right, could just further erode what trust is left in the media?

Stewart-Allen: I think there is certainly a risk at this particular moment. We’re in the middle of a pandemic, people’s anxieties are running high, many have lost family members and friends. The eroding trust put in the media across the board, whether it’s print or broadcast, is another factor that has the public on high alert. Plus, of course, we have the fake news phenomenon. So it does really make you wonder whether any April Fools’ Day prank at this moment is even going to be appropriate. But for many companies, I think they’re making the right choice this year in particular in suspending any April Fools’ Day pranks.