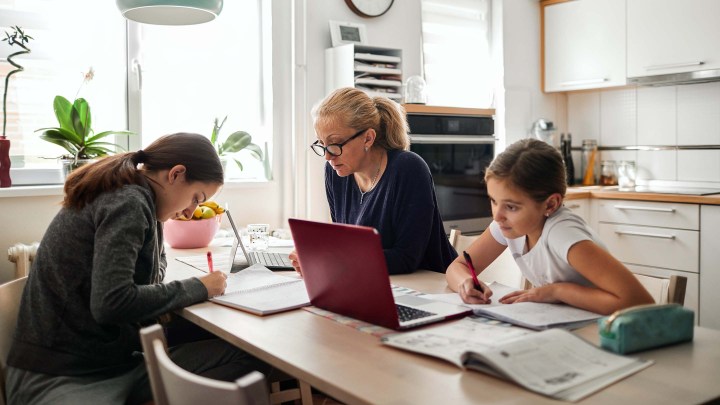 COPY
Harvard business professor Chris Stanton said even a minor increase in working from home after the pandemic could add up to billions of dollars a year for workers. vgajic via Getty Images
Workplace Culture

Harvard business professor Chris Stanton said even a minor increase in working from home after the pandemic could add up to billions of dollars a year for workers. vgajic via Getty Images
Listen Now

It’s still not clear whether remote work will remain widespread when the worst of the pandemic recedes. Many companies and workers have discovered the benefits of these more flexible work arrangements, but new analysis from the National Bureau of Economic Research shows the costs can add up.

Before the pandemic, Chris Oliver’s three-bedroom house outside Nashville, Tennessee, was already feeling cozy with a 7-year-old, mother-in-law, wife and new baby all under one roof. But when work went remote, things got even more cramped.

And that’s all in their bedroom. They’ve started looking for a new bigger place.

“We really need to do it,” Oliver said. “We need a room for an office, at least for one of us if not both of us.”

But that kind of space is pricey, and many would-be work-from-home long-termers are discovering the benefits might not outweigh the costs.

Anita White is a lawyer in Fort Lauderdale, Florida, who would like to upgrade from her one-bedroom condo where she now works at her kitchen table.

That’s how much White said she’d have to spend to get a big enough place in her area.

Chris Stanton, a Harvard business professor, analyzed the costs of remote work before the pandemic.

“Households that had one or more members who were working remotely tended to occupy larger dwellings,” Stanton said. “That probably meant that households were actually spending out of their own pockets for home office space.”

In fact, up to 10% more. Stanton said even a minor increase in working from home after the pandemic could add up to billions of dollars a year for workers.

“You need to line up the potential savings for firms with the additional expense that will be shouldered by households who might need to buy or rent bigger dwellings,” Stanton said.

That burden falls harder on workers who already spend a larger share of their salaries on housing. Patrick Ford wants to upgrade from a studio apartment to a two-bedroom, a move he figures will almost double his housing costs.

“At this point, I’m kind of at my wit’s end of living in a small box, and basically never leaving work,” Ford said.

He works in IT in Boston, where he had sacrificed space to be close to the office and urban amenities. His company is looking at a hybrid model of remote and in-person work for the future, which puts him in a tough position now that his lease is up and he’s looking to move.

“If there was no expectation of ever going into the office again, then, you know, I’d probably be looking at New Hampshire or Maine,” Ford said.

But with so much uncertainty, he’ll probably just be looking for a bigger, more expensive apartment.