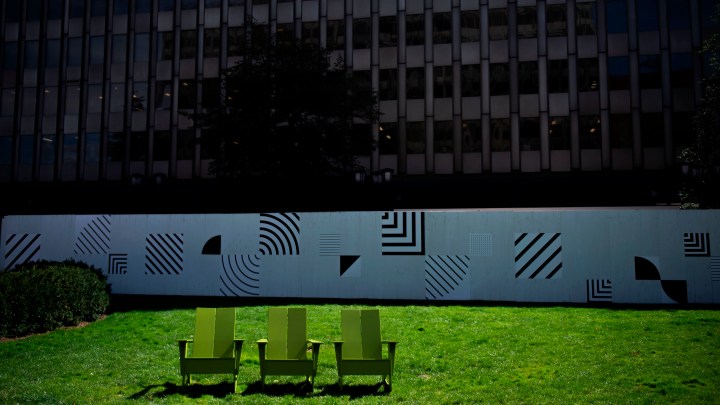 We are almost two years into this pandemic and, as uncertain as things are, we — employers and employees — have been quietly figuring out what exactly we’re all doing when it comes to the workplace.

From special arrangements to special tools, it looks like we are settling in to some kind of normality around hybrid work.

Two-thirds of companies that plan to open their offices to any extent have done so, at a minimum for employees to return on a voluntary basis, said Brian Kropp, head of Gartner’s HR practice.

“Five percent of [companies] have decided they will become a fully remote company where everybody works remote,” Kropp said.

Within that hybrid model, there are still things to sort out.

“I’m an introvert, I love hanging out with my cat and shutting the door and just focusing on my work,” said Becks Flat, bundled in a winter coat for her job interview, taking place outdoors at a plaza in Midtown Manhattan. She said many companies in her search have said they’re remote, with an important asterisk: *for now.

“You know, having a job post that says remote, but then you get into the conversation it turns out it’s not, that’s been really, really common,” she said. “At that point, I’m like, ‘Aaand goodbye.’”

Employees like Flat are, for now, winning the tug of war. “A hybrid work, or having the flexibility associated with it, has just become a basic expectation for every employee,” Kropp said.

The current hybrid work status quo for many companies — and the expectation it will continue for some time — has been like steroids for a whole industry of consultants and apps designed to help companies manage shared office space and workflow.

Things like software that visualizes a physical office space even when people are remote, or task management software to align work schedules for coming into the office based on what needs to be done.

Kropp said there are even companies with collective Spotify streaming stations with shoutouts from one employee to another, thanking them for their contributions to some task or other — the idea being to boost camaraderie.

“It has most certainly accelerated, yeah,” said Paul Statham, CEO of Condeco, which makes an app that lets employees book and reserve office space, shared desks and meeting rooms.

Another trend he has observed more in the workplace: downsizing.

Long-term commercial real estate leases make that a little complicated for many companies, which can make office downsizing an ongoing but slow process. Some companies stuck with, say, eight floors are consolidating down to four to save money on cleaning and utilities.

But when companies bring workers back to the office, be it for one day or all days, they have to answer a question: Why? To do what work?

“The challenge going forward is I don’t think we know how the work is going to be done when people are onsite,” said Cali Williams Yost, founder of Flex+Strategy Group. “The type of work that’s going to happen on onsite locations is going to be much more collaborative. The pace and cycle at which the work will happen onsite may not be consistent,” she said.

Basically, there has to be a reason or a vision to get people in the office, get them there together and not waste everyone’s time.

“There are so many great tools that are being developed that will enable the flexible, dynamic way an organization chooses to work,” Yost said. “That’s really important because the technology or the workspace really does only optimize what you’re doing if it enables a vision that you have created. You can’t lead with the technology, the workspace — you have to lead with the work. What are we doing? How, when and where do we do that best?”

Sorting that out is the next big frontier for pandemic workspaces of 2022.