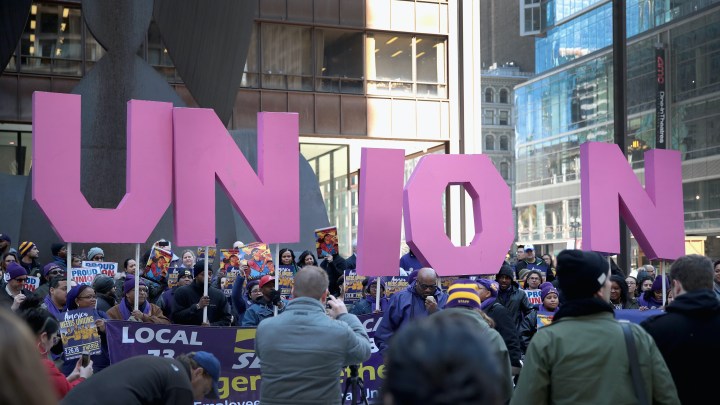 President Joe Biden has promised to be the “most pro-union president you’ve ever seen.”

But it’s not clear just how much he can achieve.

On Tuesday, the House passed the PRO Act — an acronym for Protecting the Right to Organize — which would provide some of the most extensive protections for unionizing since the 1930s.

It seems unlikely to make it through the Senate, but even if it doesn’t, the legislation could still have far-reaching effects.

Among other things, the bill would forbid employers to retaliate against workers who organize. And it would weaken so-called right-to-work laws, which allow people to work in unionized jobs without actually joining a union.

Todd Vachon with Rutgers University said the bill comes at a crisis point. “We’ve seen jobs reclassified as gig work. People are working more and more hours and unable to pay their bills and make ends meet. So I just think workers are really fed up.”

Meanwhile, the National Retail Federation called the PRO Act the “worst bill in Congress,” saying it will interfere with workers’ independence.

The PRO Act doesn’t have enough bipartisan support to become law, but Joseph McCartin at Georgetown University said it’s a fight worth waging in public. “Because by waging the fight, you help educate people to the issue and to the need for change.”

A Gallup poll last year found that 65% of Americans support labor unions, the highest percentage since 2003.

Alex Colvin at Cornell University said some Republicans are taking note. “Should they try and be more of a workers party? Well, this is where the rubber hits the road. Are they actually willing to support some additional worker rights?”

In other words, for labor, even if the PRO Act doesn’t pass, having this conversation is a big win.