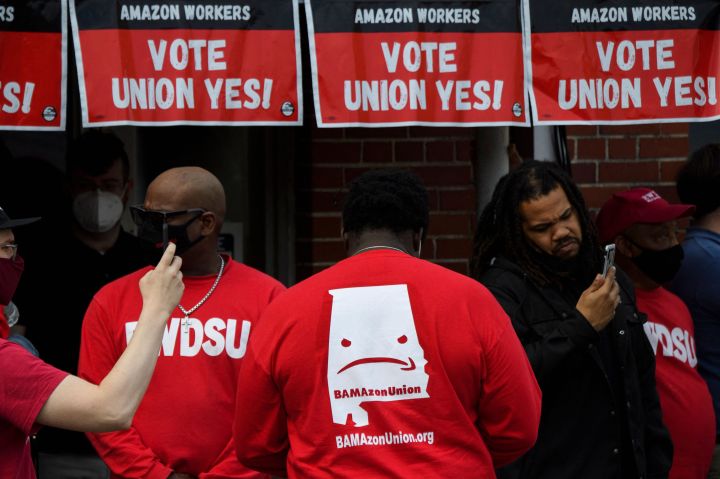 COPY
Organizers in support of the unionization of an Amazon fulfillment center in Bessemer, Alabama, earlier this year. The NLRB completed the vote count in April. Workers voted to reject the union. Patrick T. Fallon/AFP via Getty Images

Organizers in support of the unionization of an Amazon fulfillment center in Bessemer, Alabama, earlier this year. The NLRB completed the vote count in April. Workers voted to reject the union. Patrick T. Fallon/AFP via Getty Images
Listen Now

A Senate committee will today consider two appointees of President Biden’s to the National Labor Relations Board, and the Senate itself is preparing to consider a Biden-appointed general counsel for the board. The five-member NLRB enforces federal laws that grant workers the right to organize and collectively bargain through a union.

If President Biden’s picks are confirmed, the board will go from Republican control to Democratic control, which could affect how it interprets the law, said Harvard Law School’s Benjamin Sachs.

“They decide which workers are entitled to the protections of Federal Labor Law, and what exactly those protections look like,” Sachs said. The current board has tended to favor employers, he added.

“For example, the Trump NLRB ruled that workers don’t have a right to use company email for the purposes of union organizing,” said Sachs. “That’s a big deal.”

A Democratic-controlled board could reverse that and speed up the union election process, said Celine McNicholas with the Economic Policy Institute.

“Standard timelines, preventing unnecessary litigation from occurring before an election actually is held … those would make real differences,” McNicholas said.