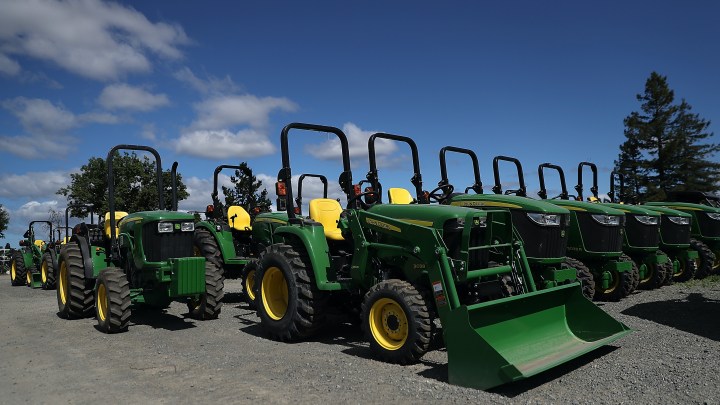 COPY
Tractor maker John Deere has unfilled openings in some locations, like much of the manufacturing sector. Justin Sullivan/Getty Images

Tractor maker John Deere has unfilled openings in some locations, like much of the manufacturing sector. Justin Sullivan/Getty Images
Listen Now

The John Deere Tractor & Engine Museum in Waterloo, Iowa, celebrates the history of mechanized agriculture. But the museum’s hosting an event this weekend that’s very much about the present: a job fair.

“The jobs that we’re currently focusing on are general assembly, some welding and some machining jobs,” said Randy Venzke, labor relations manager at John Deere’s Waterloo Works, where they make those iconic yellow-and-green tractors.

He said the company started its hiring push back in December. It quickly had over 1,000 applicants and was able to fill more than 200 jobs.

“Since then, the number of applications have really dropped off,” he said. “In fact, we’ve received about 100 or 110 applications in the past two weeks.”

He said they’re trying to hire about 300 more people by April. One problem, though, is there are only about 130,000 people in the county, and unemployment is currently under 4%.

Across the U.S., manufacturing activity is up, increasing to a three-year high in February as consumer demand rebounded after the early stages of the pandemic.

“Manufacturing has been growing. Not quite for a year, but for the last nine months,” said David Berson, chief economist at Nationwide Insurance. “Because it’s been growing, has needed workers, and they’re starting to run out of workers for whom manufacturing jobs are the appropriate position.”

Jed Kolko, chief economist at indeed.com, said there’s a skills mismatch between the job openings and those seeking employment because while services, leisure and tourism had to scale back, the manufacturing, warehouse and construction industries are ramping up.

And, Kolko said, the industries that initially laid people off around this time last year are starting to hire people back.