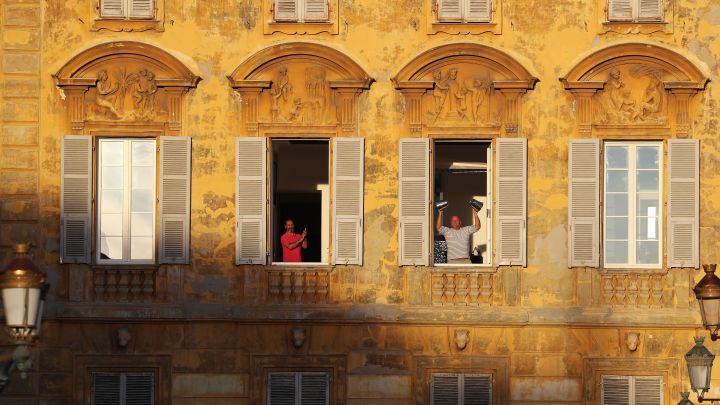 COPY
These shutters on the home of famed French painter Henri Matisse? Functional. The shutters of so many homes in the U.S.? Dysfunctional. Valery Hache/AFP via Getty Images
Adventures in Housing

These shutters on the home of famed French painter Henri Matisse? Functional. The shutters of so many homes in the U.S.? Dysfunctional. Valery Hache/AFP via Getty Images
Listen Now

Scott Sidler has a thing about shutters.

“I think shutters are beautiful — you get them on a Colonial Revival or a house where they belong, and they’re amazing,” he said. “But I just think that America has no clue how to use shutters right now.”

We have far more pressing issues, to be sure, but consider: Shutters were invented to keep the weather out, Sidler said, so they needed to be the same height as the window and half the width, so they’d cover it when they were closed.

But on a lot of houses these days, they’re merely decorative.

“They’re vinyl, they’re screwed into the wall, they’re not the right size,” he said. “It just baffles me that people don’t understand the simple idea that a shutter shuts.”

If it doesn’t, he said, it should at least look like it could.

“If you have something that is, like, a sliver of the window size, what exactly is that doing?”

Sidler didn’t just wake up one day with a shutter fixation. He restores old houses for a living. His company, Austin Historical in Orlando, Florida, specializes in windows and doors. So naturally, when he drives around the city, he notices, well, windows. And one day, about four years ago, his wife called from her car.

“You’ve got to go by this house,” she told him. “It has these razor-thin shutters painted this really gaudy pink color.”

That wasn’t even the worst of it.

Sidler took a picture, posted it on Instagram, “and then I was like, ‘You know what, I keep seeing them. They’re everywhere,’” he said. “’I’m going to start posting this every Sunday.’”

Search the hashtag on Instagram and you’ll find shutters that are too skinny, too short, too long. Rectangular shutters for curved windows and curved shutters for rectangular windows.

Even the “under-shutter,” below the window.

Soon, fans started sending him photos from around the country.

“It got such a huge reaction,” Sidler said. “I went, ‘Oh good. I’m glad I’m not alone, and I’m not just this really cranky old guy who’s like, these darn shutters are just terrible.’”

He gets that people are often just trying to dress up a plain house, and vinyl shutters are a relatively cheap way to do that. His real passion is the windows themselves — and teaching homeowners how to restore and preserve them so they won’t have to spend tens of thousands of dollars replacing them.

Which brings us to Window Wednesday.

Sidler, who got his start in musical theater, does weekly sessions on Instagram Live, answering questions about putty and pulleys and how to unstick a stuck window — a big reason people replace their old windows. The whole shutter shaming thing is just a gateway.

He’s only heard from one homeowner he “featured” on Instagram, he said, and they were pretty cool about it. He has heard from people who took down their shutters to avoid getting called out, and some people think it’s mean. He said he’s talked to a few shutter companies about sponsoring #ShudderSunday, but they didn’t want the potential blowback.

“I don’t mind if people get upset about it because it’s all in good fun,” Sidler said. “It’s really to help educate people, and I think if you make people laugh while you’re educating them, it sticks.”