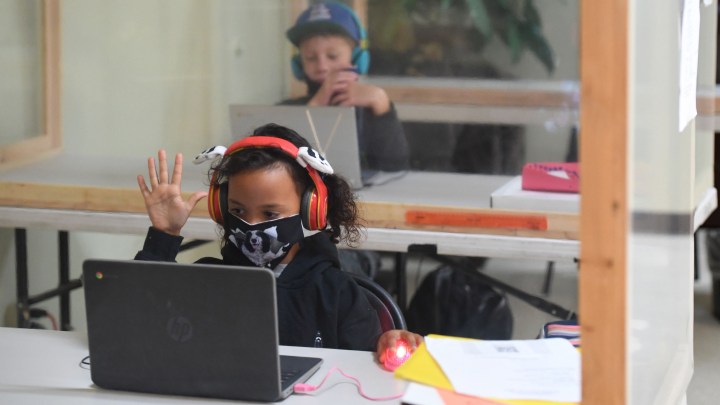 Last summer there was a lot of uncertainty about schools opening — and about how learning would happen. Allison Fried in Fairfax, Virginia, certainly felt that. So, as her oldest daughter was about to start kindergarten, she decided to start a learning pod in the basement of the house where she lives with her husband and three children.

Fried put a call out for parents interested in forming a pandemic learning pod and found five other families. She hired a teacher and added to her family’s homeowner’s insurance.

Everyone in the pod had to withdraw their children from the local school district. Each family pays $1,000 a month to cover the teacher, a cleaning crew and supplies.

“The cost per family and what we would be paying out of pocket was literally 50% of what we were paying the year before for private preschool,” she said.

Fried calls the pod “amazing.” She said the kids have a strong bond and that they’re learning.

“I find myself having extreme hesitancy thinking about going from this situation that has just been 100 times better than I ever anticipated and thinking of sending her back into a public school classroom,” she said.

Fried is worried about the variables. Will regular school be remote or hybrid? What about vaccinations? Will the kids really be able to interact?

Marty West, a professor at Harvard Graduate School of Education, worked on a recent survey that found about 6% of K-12 students in the U.S. are in some kind of academic pod.

“One on hand, that sounds like a fairly small percentage. At the same time, it does represent more than 3 million students nationwide,” he said.

West is watching to see if the pandemic pod experience will continue to draw families away from public school districts toward private schools, homeschooling and pods.

“And if that’s the case, that would have big implications for school district finances,” he said. That’s because those budgets are mostly based on the previous year’s enrollments.

Some parents are keeping their kids enrolled in their local district and supplementing with a pod. That’s what Allison Yrungaray has done in Riverside, California. Her daughter attends first grade remotely and is in a Spanish-language pod with four other kids. They meet a few hours a day, a couple days a week.

Yrungaray started the pod and thinks she might keep it going next year, even though the first teacher she hired quit as COVID-19 cases were rising in the fall.

“She didn’t feel that all the families were doing exactly what they should be to follow the guidelines and be safe,” she said.

Despite the waivers and contracts and codes of conduct, there isn’t always institutional stability in these arrangements. And there’s also human nature.

Adam Scales, co-director at the Rutgers Center for Risk and Responsibility, said he personally hasn’t heard of any COVID-19 related pod lawsuits. He said they’d be hard to prove.

“I think it’s pretty unlikely that somebody who you directly trusted with your kid three weeks ago is going to seem an attractive target absent egregious misconduct,” he said. “Not that it’s not possible, but I think it would take a lot,” he said.

For Allison Fried in Virginia, the contracts everyone signed have been crucial to the pod’s success.

“Part of the agreement with the families is that we’re all being extremely careful. You’re only going to critical-need places,” she said.

But in January, she and her three children got COVID-19. The pod shut down. No one else got sick, and the pod is now back in session.

This month, some in-person learning resumed in her district. Even so, Fried is thinking the pod may outlast the pandemic.