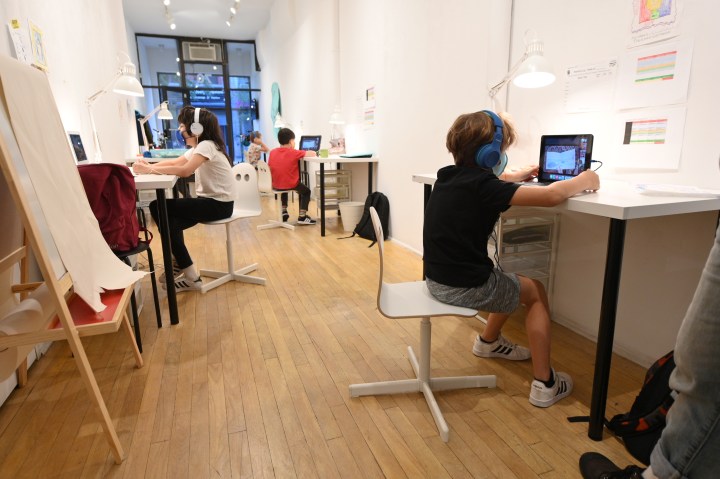 COPY
Learning pods were an early-pandemic innovation, but as children return to school, some are examining if the pod model could still be a viable business option. Michael Loccisano/Getty Images

Learning pods were an early-pandemic innovation, but as children return to school, some are examining if the pod model could still be a viable business option. Michael Loccisano/Getty Images
Listen Now

When schools closed at the start of the pandemic, some families turned to a workaround known as “learning pods.” They would get together a group of kids, find an instructor – sometimes a parent, sometimes a former teacher – and bring them all together.

Many of those students have since returned to school in person, but a new report from an education reform group finds that what started as a workaround has become a business opportunity.

Pamela Petty was one of the people interviewed for the report, which is from the Center on Reinventing Public Education. Petty was a professor who taught teachers, and during the pandemic, when her grandkids were in school virtually, she offered to teach them herself.

“I thought, ‘we’ll get through the days. I know how to teach. They’ll learn the stuff. But none of us are going to be having any fun,’” said Petty.

So Petty got together a group of kids in Carthage, Tennessee, where she lives – and enlisted a few other grandmothers to help. She was able to personalize lessons and teach at each kid’s pace. She called it “Grandmommy University.”

She taught music with roots in local history, like the song “Battle of New Orleans.” The lyrics mention Colonel Jackson, who would later become President Andrew Jackson. He’s originally from Tennessee.

“What I’ve wanted my grandchildren to think of when they think of this pandemic, is what a great time they got to have at grandmama’s school,” she said.

The new report said many of the families who formed pods preferred them over traditional schools.

“Pods were able to provide opportunity for more intimate relationships between the students and the teachers, between students and peers,” said Jennifer Poon, one of its authors.

The report isn’t representative of the American population. It only includes people who participated in pods, and they tend to be a lot wealthier than the average American: Nearly half of households in the survey had annual incomes above $125,000.

And in some cases, instructors could afford to volunteer their time, like Pamela Petty in Tennessee, for example.

Also, because learning pods are so new, there’s no data to show how effective they are compared to traditional schools. Now that many students have returned to school, it might be hard to find out.

But all that interest from those who participated in pods looks like an opportunity to entrepreneur Amar Kumar. He launched a startup called KaiPod Learning to bring together families interested in them.

“Right now it’s all DIY, parents have to find the other families themselves, they have to find the educator,” said Kumar. “We think there’s a real need here to help parents join pods, set them up for them.”

Kumar said about a third of the students his company serves are homeschooled.

“Their parents wanted to have greater oversight control and insight into their kids’ education,” said Kumar. “But they still want their kids to be around other kids.”

That’s a growing market: the percentage of American households homeschooling has more than doubled over the course of the pandemic.