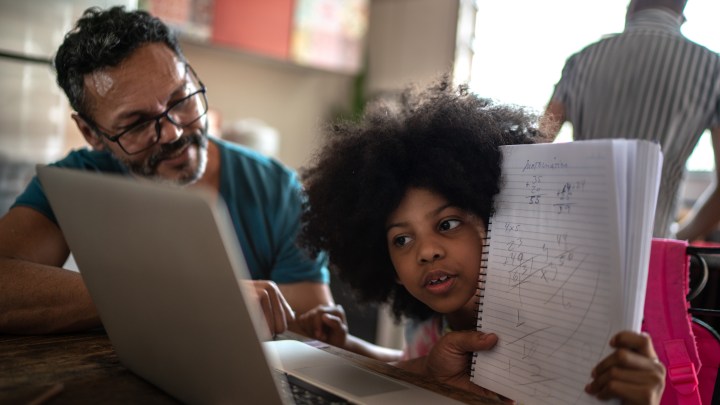 School kids are heading back to class this week, many still learning remotely as much of the country continues to grapple with mounting COVID-19 cases. Parents have struggled to manage the competing demands of work and supervising remote school. Some have worked out a tenuous system, and all have made major sacrifices.

Back in the summer, Delane Rouse was considering putting his twin, 10-year-old daughters in a “learning pod” — teaming up with a few other families to manage virtual school in a small group. But eventually the Washington, D.C., photographer decided he could handle it himself.

“One of the things I bought early on was a bell,” he said. “A little ringing bell, like when you walk up to the front desk at a hotel.”

The idea was that, rather than having his daughters scream across the house every five minutes when they needed help, they could ring the bell. Then he would hop up and run to the bedroom or the dining room to offer assistance.

“That got old quick,” he said.

Turns out, they need a lot of help. Even without an obnoxious bell, supervising remote school is pretty distracting. Rouse can only do it because his business taking corporate headshots has dried up as executives stay home in sweatpants.

Meanwhile, in New York, the pandemic has brought new opportunities to Keren Sachs, who also works in commercial photography. She runs a platform, The Luupe, that helps women photographers find gigs.

The last time we heard from her, she was hiding from her two young kids just to take the call. She worried she wouldn’t be able to grow her business with the kids demanding her time.

“We created a pod with some neighbors,” she said. “So every day, we have three children on Zoom with a [baby]sitter doing school.”

Her 3-year-old son had been going to in-person preschool until it closed down because of an outbreak. So she set him up on a laptop next to her desk while she tried to focus on work — until she realized he had been buying and downloading video games, one called Paw Patrol.

“You think you have everything under control. You think that you have figured out your life in the pandemic and things are going smoothly, and you can do it all,” she said. “And then you realize you just can’t.”

Managing the activities of six kids at home was way too big a job for Kelly Newman to even attempt to take on while working. Back in the fall, we learned she had quit her job as a family law attorney.

“Crisis mode is not what we had planned for our family,” she said. “We had hopes and aspirations, and we had hoped that our hard work would pay off.”

She and her wife have already burned through much of their nest egg, which they’d hoped to put toward buying a home in south New Jersey.

That goal feels out of reach now, but her new reality does have its rewards.

She hopes someday she can return to practicing law as her own boss, with a bit more time for her family.