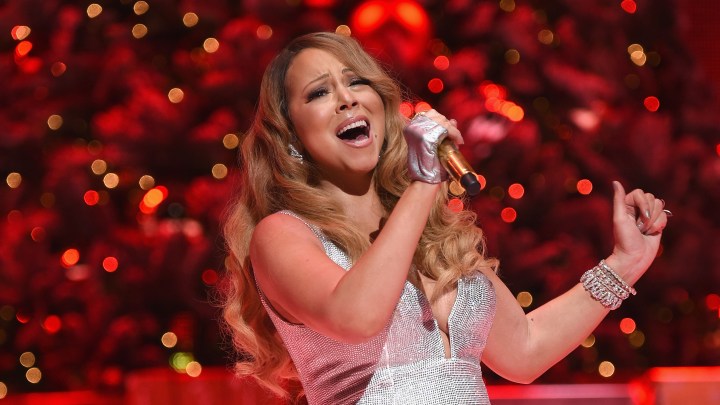 Each year, it seems to start a little earlier. Decorations hit the shelves the day after Halloween. Lights twinkle on houses days before Thanksgiving. Songs about an outcast, red-nosed reindeer and wintery wonderlands blast on supermarket speakers in a loop.

Christmas music is a major component of the season. And with seemingly every artist putting out a Christmas album (Snoop Dogg’s “Christmas In The Dogghouse” anyone?), it’s clearly a reliable money-maker. After all, the best way to spread holiday cheer is singing loud for all to hear.

But how do Christmas albums turn such a profit when they’re only relevant a few months out of the year — especially when album sales are down across the board? Well, people still give them as gifts, said Nate Sloan, assistant professor of musicology at USC’s Thornton School of Music. And it might be the one time of year people actually buy an album, he said. Sloan gives the example of the a cappella group Pentatonix, which had two of the best-selling holiday albums of the past decade.

“One of their regular releases, the album ‘PTX Vol. 3,’ sold about 200,000 copies, which is actually quite good for an album these days,” he said. “But their Christmas album, ‘That’s Christmas To Me,’ sold 1.4 million copies worldwide. So, it’s far above the baseline for typical album sales today.”

Christmas songs also do well on streaming services. The person performing the song does get some revenue from the streaming service, like Spotify, but the writers are the real winners here, said George Howard, associate professor of music business and management at Berklee College of Music.

Howard said streaming services like Spotify help strengthen the songs that are already hits by putting them on the Spotify-created playlists. Listeners then use Spotify’s playlists as a basis for their own, leading to a flywheel effect.

“It’s no longer about new Christmas songs being released; it’s about them being recycled,” he said.

A firehose of money

So a song like Mariah Carey’s “All I Want For Christmas Is You” is a “monster revenue driver,” Howard said, for Carey and her co-writers. The real genius of Carey, though, is that she’s the performer, co-writer and co-producer on the Christmas classic, “so she’s got money coming in three different ways,” he said. And that money is adding up. One heavily cited estimate puts the song’s revenue at $60 million over the years, but Howard calculates it to be around $10 million a year.

For the songs that aren’t yet in the public domain, the writers and publishers of those songs receive royalties whenever the songs are streamed or played on the radio. And then again if the songs are licensed for TV commercials, movies or other media.

“It’s just a firehose of money,” Howard said. “The more people who cover these songs, the writers make out like bandits.”

But a lot of Christmas classics have fallen into the public domain over the years, which makes covering them even more appealing for artists. And some of the older classics are the ones that reliably make it to the top of the Billboard charts in December.

“If you look at the Billboard Hot 100 in any given week, it’s a series of entries that are constantly changing and constantly being replaced by new releases. That’s the way that the music charts work,” Sloan said. “Except in December, when all of a sudden songs from 1934 start to appear alongside Justin Bieber’s latest single.”

Sloan attributes the phenomenon to people craving a sense of tradition and culture and familiarity, which keeps listeners coming back to the same Christmas canon of about 50 songs.

Getting into the Christmas canon

Nostalgia is certainly one factor to Christmas music’s success, but being tied to another form of media helps solidify it as a classic. It didn’t hurt, for example, that Carey’s “All I Want For Christmas Is You” is featured in the 2003 blockbuster hit “Love Actually.”

“That sort of both sustained and also catapulted that song into another echelon of popularity and really kept it in our collective conscience, too, because that move was such a hit,” Sloan said.

It’s no longer about new Christmas songs being released; it’s about them being recycled.

Other standards are heavily tied into films as well, like “White Christmas” from the movie of the same name and “Have Yourself a Merry Little Christmas” from “Meet Me In St. Louis.” Songs can get a bump from being on a film’s soundtrack too, Sloan said. After the 2003 comedy “Elf” featured Ella Fitzgerald’s “Sleigh Ride,” the decades-old recording was a hit again for a little while after.

But really, Howard said, what launches a Christmas song into a standard is what makes any other song a classic.

The next Christmas classic?

Which might be why it’s so hard to create a canon-worthy song. The last one, really, was Mariah Carey’s, which came out in 1994. Sloan said it takes awhile for these songs to really cement in our imagination and might ebb and flow in popularity before becoming cannonic.

But, he thinks we could be on the cusp of a new addition: Ariana Grande’s 2014 song, “Santa Tell Me.”

“I think it’s just one blockbuster Christmas movie away from becoming the heir to Mariah Carey’s ‘All I Want For Christmas Is You,’” Sloan predicted.

As the third most-streamed Christmas song of all time on Spotify, “Santa Tell Me” could just make it.