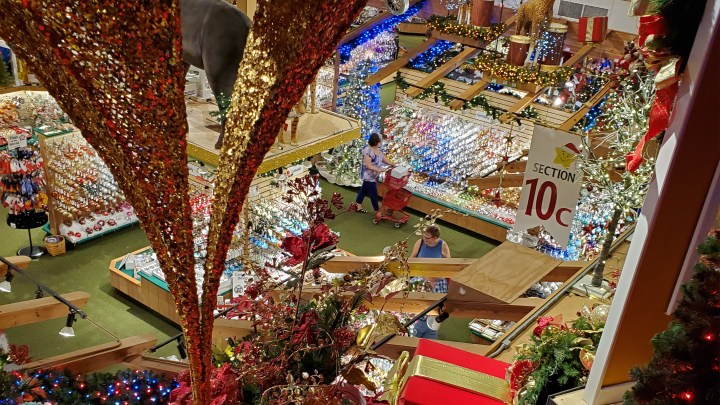 Shannon Roberts moved to Big Bear Lake, California, with her husband in 2015 and “jumped off a Christmas cliff.”

“I used to be in real estate, but I just didn’t want to do that again, and I absolutely love Christmas,” Roberts remembered. “So my husband said, ‘Why don’t you start a Christmas store?’”

For a little more than three years, Roberts has been running her year-round Christmas store with a couple part-time employees. Keeping a store going that seemingly has a long off season requires a bit of creativity.

“We sell Halloween, [and] a little bit of every holiday. I have other items that aren’t strictly Christmas or holiday related,” Roberts said. “That’s why I named it A Christmas Store ‘N’ More. I concentrate on the more part a lot.”

There are three common strategies year-round Christmas stores use to stay open, according to Kalinda Ukanwa, an assistant professor of marketing at USC Marshall School of Business. Some stores may advertise as Christmas stores but also market the same items for different occasions, like selling string lights for event planning. Another strategy is to plan carefully in terms of marketing and hiring, scaling back operations in the slower months. A third is to make the store itself a destination, which Bronner’s Christmas Wonderland has been doing for nearly 75 years.

Wally Bronner started the store in the 5,000-person town of Frankenmuth, Michigan, in 1945 after his artistic trimmings in the window of a hardware store caught the eyes of a few merchants.

“He painted them some Christmas panels, which they hung from their city lampposts,” said Wayne Bronner, Wally’s son and current CEO and president of Bronner’s Christmas Wonderland. “They were so admired by so many other cities that it lead to the start of the Christmas business.”

The store — bigger than one and a half football fields — has more than 2 million visitors every year, Wayne Bronner said, peaking the weekend after Thanksgiving when as many as 50,000 people come through.

According to an IBISWorld report, there are over 174,000 “seasonal decorations businesses” in the U.S. Seasonal businesses in general aren’t that uncommon, USC’s Ukanwa said. Ski resorts, tax preparation businesses and tutoring are all seasonal.

In the busy season, Bronner’s has 750 employees on the payroll and scales down to around 350 in the slower months of February and March. Bronner uses that time to replenish inventory, traveling to source items from around the world.

While the Christmas season is Bronner’s busiest, the store still gets foot traffic the rest of the year.

“[On] a typical day in the summertime, we might have a couple thousand people come through our store,” Bronner said. “It’s unique in its own right — they want to see Bronner’s, the world’s largest Christmas store, and experience Christmas no matter what the time of the year.”

For people that can’t make it to the store in person, Bronner’s has a catalog and a website. At this time of year, Bronner said they ship out 4,000 to 5,000 packages a day.

Roberts of A Christmas Store ‘N’ More takes a different tack — she’s solely brick and mortar. She sources mainly from markets in Las Vegas and Los Angeles, and carries items that aren’t easily found at Target or Walmart.

Only a handful of times has someone pulled out their phone in the store and found the same item she’s selling for cheaper online. It’s the ambiance of her store that keeps people coming back, Roberts said, even though Amazon is “a never-ending battle.”

“The majority of people that come in here love Christmas, and they love the feelings that it brings. It takes them back to childhood,” she said.

“It also becomes really emotional for a lot of people,” Roberts continued. “A lot of the time I end up spending an hour talking to people — they lost a family member around Christmas. It’s so much more than just ‘come in to shop.’”