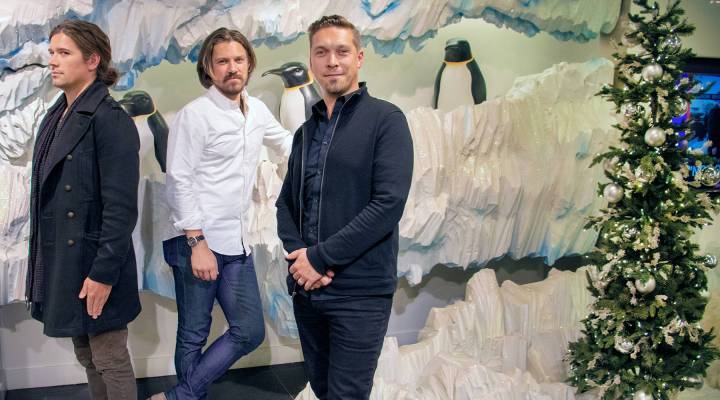 COPY
The brothers in Hanson — Zac, Taylor and Isaac — are reissuing their 1997 holiday album "Snowed In" this year. Their second holiday album, "Finally it's Christmas," came out in 2017. Peter Balonon-Rosen/Marketplace

The brothers in Hanson — Zac, Taylor and Isaac — are reissuing their 1997 holiday album "Snowed In" this year. Their second holiday album, "Finally it's Christmas," came out in 2017. Peter Balonon-Rosen/Marketplace
Listen Now

Just a few months after they broke out with “MMMBop,” the Hanson brothers moved into a London studio where they spent a very busy four and a half weeks making their Christmas album “Snowed In.”

Isaac Hanson cut in. “Which was just like a dream, actually.”

“We were all in a bubble,” Taylor Hanson added.

It paid off. “Snowed In” went platinum, and it was one of the best-selling Christmas records of the ’90s, along with Kenny G and Mariah Carey. Still, Hanson waited two decades to record a follow-up, “Finally It’s Christmas,” last year.

“You know, a lot of the conversation about making Christmas records or not can get very kind of weirdly … callous,” Isaac said. “Even with the success of that record … we were very conscious of the fact that we don’t want to be just churning out marketable products,” Taylor added.

But there’s pressure on recording artists to do just that. Holiday music gets more and more popular every year. While the recording industry has changed seismically since the ’90s, there are still a lot of good reasons to make a Christmas album, even if you might not make the next “All I Want for Christmas Is You.”

An original hit can be lucrative — Carey’s reportedly earned $60 million in royalties on that track alone. And the data show people are hungry for new Christmas music, said Jon Miller, vice president of audience insights at Nielsen. Even though physical and digital sales have slowed significantly, streaming numbers and the growing popularity of all-holiday radio stations has more than made up the gap.

“Globally it’s just there’s more appetite for holiday music,” Miller said. “Every year there’s more stations that do it. There’s more songs being streamed. So it appears that Americans just want more and more every year.”

And that’s broadened the market, Miller said. Nielsen’s data from last holiday season show people tend to stream more new Christmas music than they hear on the radio, which leans more on classics.

But those classics are never far from recording artists’ minds.

“It’s incredibly intimidating to write Christmas songs because essentially — unlike anything else you do — you’re saying ‘OK, here’s a classic!’” Zac Hanson said.

Ingrid Michaelson said her new Christmas album “Ingrid Michaelson’s Songs for the Season” was one of her toughest records to make. She worked with a symphony and got her hands on vintage equipment in pursuit of a classic, mid-century sound.

On top of all that, Michaelson said, writing a brand-new song came with a lot of pressure. The one she ended up with, “Happy, Happy Christmas” is a melancholy song reflecting on her parents’ deaths. Anything else felt too cheesy, she said.

“I remember my manager was like, ‘It would be really lovely if you could get another original.’ Like, I agree with you. I do. But I just can’t do it,” Michaelson said. “It’s not happening, and I’m not going to force some crappy Christmas song into the world.”

There is good reason for Michaelson’s reluctance. Music fans have more choices than ever in the streaming era, and that means artists have to compete more for attention. A Christmas album can hang around for years. That can be a benefit too — it helps keep fans interested over the winter months.

“If you’re on the road hawking your wares there’s a point, like a lot of businesses but especially with music, where you you might as well take a month off,” Taylor Hanson said. “If it’s authentic, and if it’s something you can stand behind, [making a Christmas album] is a cool way to sort of share in something — a lot of people are having these experiences and you get to [do] the soundtrack.”

An artist can hopefully count on fans streaming the album or going to a Christmas show for years after. Hanson is reissuing “Snowed In” this year on vinyl, a format that was far out of fashion in the CD heyday of 1997 when the album debuted. Other reissues come a lot sooner.

“I was being told by people, like, ‘Oh, yeah, there’s only a handful of people putting out holiday records this year, it’s a really quiet year. And then all of a sudden it was like: Sia deluxe album! … Gwen Stefani deluxe album!” Michaelson said. “And I was like, wait a minute, they just put it out last year, and then you put out a deluxe album the next year?”

She joked, “OK, I guess I’m going to do a deluxe album next year.”

That kind of long tail is all the more important these days. Some Christmas albums still sell big, like Michael Bublé’s “Christmas” or Pentatonix’s several holiday releases, but most artists can’t live on sales and streaming royalties alone.

“The last avenues left to musicians for finding profit, and I won’t say easy profit … are live performance and placement in movies and TV and advertisements,” said Rhett Miller, lead singer and songwriter of the the Old 97’s. “That’s a way that you can make money when there’s no real money to be made from album sales or — God forbid — streaming services.”

Miller’s band is on a nationwide tour this winter to support its first Christmas album, “Love the Holidays.” One of that record’s nine Christmas songs stands a better chance than their other output of being featured in a a movie or show, Miller said, which could itself become a perennial favorite.

There’s a persistent notion of the Christmas album as a quick, easy cash-in, but the math doesn’t totally add up in the streaming era. The Hanson brothers own their own label now, and they’re getting creative.

But none of that works if you’re making music just to make money, Isaac Hanson added.