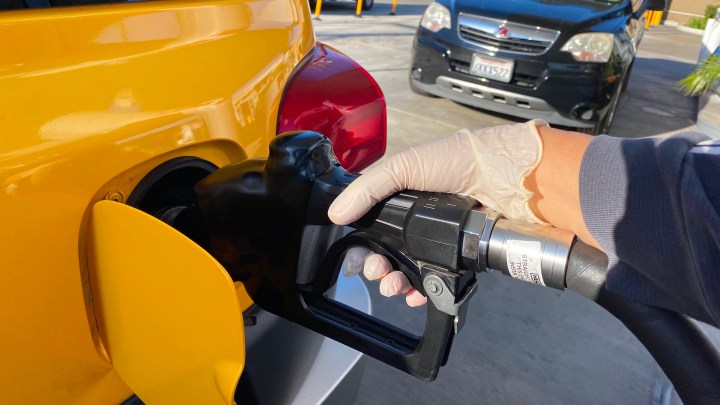 One industry analyst predicts that Christmas Day gas prices are likely to be at their lowest levels since 2015. Chris Delmas/AFP via Getty Images
COVID-19

One industry analyst predicts that Christmas Day gas prices are likely to be at their lowest levels since 2015. Chris Delmas/AFP via Getty Images

It’s Monday of a holiday week. In most years on this day, you’d be hearing a familiar broadcast trope about how high or low gas prices are.

As of Friday, the national average was about $2.21 a gallon, according to the AAA. But even those low prices don’t appear to be enough to entice people to travel over the holidays in a pandemic.

AAA estimates that 34 million fewer people plan on traveling this year compared with Christmas week of 2019.

According to Jeanette McGee with AAA, “what that ultimately means is 3 in 4 Americans are going to stay home.”

McGee added that many of the people who said they were planning long drives this holiday might yet cancel their plans in the next few days.

That’s what happened in November, she said. “For Thanksgiving, we’d forecasted at least a 10% decline, and as we’re going through and finalizing our data, that’s looking more like a 15%-20% decline.”

And that’s despite the low gas prices, which have been depressed partly because demand for gas has been low since the start of the pandemic.

Patrick De Haan, head of petroleum analysis for the website GasBuddy, said that “in a typical year where income is being earned at a normal pace, having a lower gasoline bill would certainly be helpful and a windfall to consumers.”

But, in the face of the challenges of COVID-19, cheap gas prices have not been a big incentive to travel this year.

“Now, under such economic duress, most consumers are probably not noticing the savings. Or the savings are going to more important things like keeping a roof over their head,” De Haan said.

He also said that although optimism over the coming vaccine has pushed the cost to fill up your tank slightly higher in recent weeks, on this Christmas Day, prices are likely to be at their lowest levels since 2015.