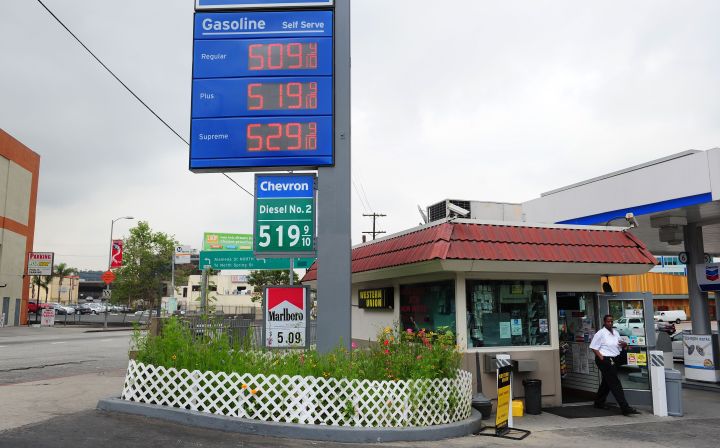 COPY
In 2012, gas prices in Los Angeles were over $5 a gallon. Frederic J. Brown/AFP via Getty Images

In 2012, gas prices in Los Angeles were over $5 a gallon. Frederic J. Brown/AFP via Getty Images
Listen Now

Gas prices this weekend are the highest they’ve been for the holiday since 2014, according to Jeanette McGee with AAA. That year, AAA reported that high fuel prices were connected to instability in Iraq.

“Every holiday we’ve seen this year has been the most expensive since 2014,” McGee said.

This year, the supply chain has been strained by the pandemic. Demand shot for gas up this summer as people hoped to get out and travel. And Hurricane Ida stopped some production, further cutting into supplies in some regions.

“So right now you see as a station comes back online, long lines at that station, because people are panic buying,” McGee said. “They just want to get there and get gas and fill up.”

About 13% of U.S. refineries were taken offline in advance of the storm, according to the Department of Energy. Patrick De Haan of GasBuddy said it looks like a matter of weeks before they’re all running again.

“The loss of that gasoline, some millions of gallons of gasoline on a daily basis, makes an impact nationwide. In fact, we’re talking about over 10% of all gasoline produced being shut down because of this,” he said.

Despite the Centers for Disease Control and Prevention urging unvaccinated people to avoid travel, De Haan said it didn’t look like the coronavirus delta variant was discouraging travelers.

“We have not seen a dramatic hit to gasoline consumption. It does appear that Americans are growing tired of the variant slowing them down,” he said.

Recent GasBuddy data has shown some decrease in demand, but De Haan said that’s probably just seasonal, as people wrap up vacations and go back to school, “and with the delay of return to office across the country likely happening this fall,” he said. “I do think that further declines in demand are likely, especially with the conclusion of the Labor Day holiday weekend.”

And while travelers have dealt with high prices this summer, they’re mostly just high compared with last year, according to Rystad analyst Claudio Galimberti.

“So all in all, I think that the the oil prices are relatively normal on the high side, but they are not, by any means, out of whack,” Galimberti said.

And after this long weekend, he added, we’ll likely be past the summer peak.