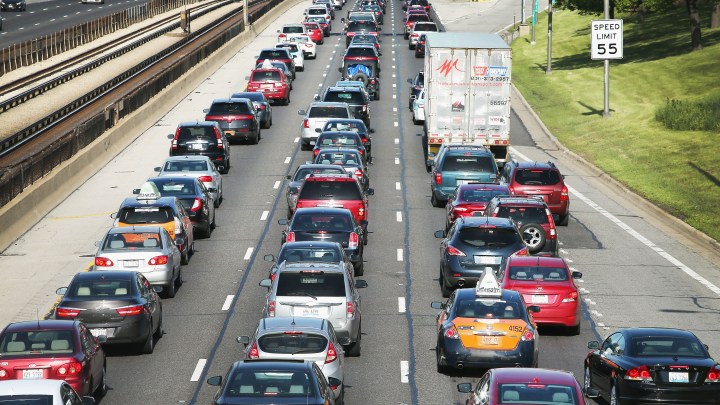 COPY
Fourth of July weekend gas prices for 2021 are expected to be the highest since 2014. Scott Olson/Getty Images

Fourth of July weekend gas prices for 2021 are expected to be the highest since 2014. Scott Olson/Getty Images
Listen Now

AAA predicts that over the holiday weekend Americans will make more than 43 million car trips. And that would be an all-time record for July Fourth, with car travel remaining popular as the economy continues to reopen. But when those travelers pull into the gas station, they will likely be confronted with the highest Independence Day gas prices since 2014.

Emily Mills is among those who are on the road, despite the gas prices. Mills, who is from Tennessee, said it has been more than a year since she had seen her family in Colorado.

“It’s like we were coming no matter what. It’s just time to see people even if there’s a cost associated with that,” she said.

For a brief moment, she considered flying to see them, then getting a rental car. “We did check prices and it was just so much higher, we were like, ‘That’s not even a contest,'” she said.

So she and her husband are sticking with the old 2006 Lexus SUV, which Mills said she even fixed up for the trip.

They’ve driven through Kentucky, Illinois, Kansas and Missouri, and Mills said it’s been a snapshot of fuel shortages.

“We had family text us ahead of time saying ‘Make sure you fill up before you get here,'” she said. “We also stopped to get a gas can to fill up extra gas.”

Some Colorado gas stations were closed without people to staff them. But Mills said she has seen that not all states are equal when it comes to prices.

“Colorado has definitely been the most expensive thus far,” she said. AAA reports the state average is around $3.40 a gallon.

That’s about the tipping point when people start taking a closer look at their road trip itinerary, or whether to drive an RV or a more fuel efficient vehicle, said Jeanette McGee, an AAA spokesperson.

“So they just may partake in some more free activities, or they may eat out less. Others may look at gas prices and decide they may not want to travel as far and they’ll just change their destination to somewhere a little bit closer,” McGee said.

Some businesses rely on out-of-state travelers this time of year. One such business is a drive-in movie theater called the Holiday Twin, in Fort Collins, Colorado.

“We’ve seen a lot of people from Wyoming, which is pretty typical for us,” said Josh Cisar, the general manager. “But what we would normally really be seeing is the Midwestern states. A lot of those we haven’t seen yet.”

Cisar said gas prices might have something to do with that. Plus, he hasn’t seen a single customer show up in an RV so far this season.

“Which is kind of outlandish to me. Normally we get them every week,” he said.