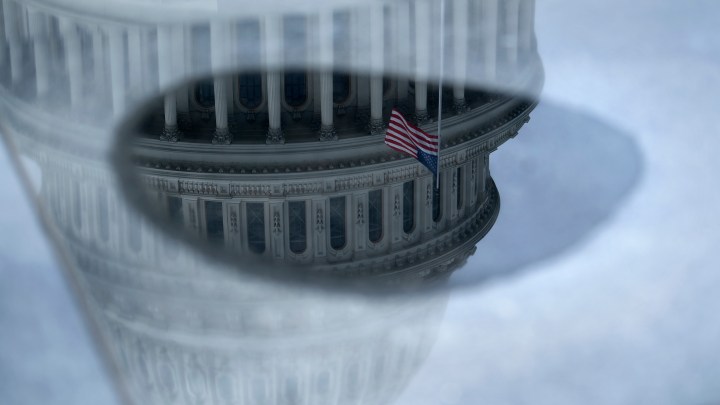 Around $3 billion a year is spent on lobbying, according to the Center for Responsive Politics.

The biggest, and most lucrative, lobbying firms in Washington are bipartisan. They advertise themselves as one-stop shops, staffed up with dozens of Republican and Democratic influencers who can reach out to both sides of a divided government and try to sway members of Congress.  Last March, lobbyists on both sides of the aisle were working night and day as Congress pushed through a massive coronavirus relief package, known as the CARES Act.

Lobbyist Richard Gold still remembers what it was like. All of his restaurant and hotel chain clients wanted relief.

Gold is a lobbyist for Holland & Knight, one of the biggest lobbying firms in Washington, deploying dozens of professional persuaders to Capitol Hill. Gold remembers prepping a CEO in the hard-hit travel and leisure business on how to make his case to senators.

Gold and his clients wanted to make sure that the CARES Act allowed franchise owners with fewer than 500 employees to qualify for Paycheck Protection Program loans. Gold told the CEO — it’s OK to get emotional.

“People are very scared,” he remembers telling the CEO. “Business doesn’t exist right now. And you follow that with, we employ, you know, 150 people in your district.”

Predictably, Republicans and Democrats wanted different things out of the CARES Act. Gold says Democrats were focused on protecting individual jobs, while Republicans wanted to keep businesses from going under. Gold is a Democrat — a former Capitol Hill staffer with ties only to Democrats.

Luckily, Gold’s colleague Joel Roberson was also on the call with the CEO. He’s a Republican lobbyist at Holland & Knight. Roberson says they divvied up the lobbying duties, tailoring arguments with the fundamental philosophy and goals of each party in mind.

Fast-forward to this month. Now Gold and Roberson are trying to have an amendment inserted into the latest coronavirus relief bill. It would give businesses more flexibility in how they can spend PPP loan money. Roberson says, when Congress is this bitterly divided, you have to hire bipartisan lobbyists to work on big bills. Because they’re the only ones talking to each other.

“Oftentimes, as political leaders have told their members not to negotiate amongst each other to undercut the leadership’s position, they will talk with us,” Roberson said.

That access is very profitable. Though lobby shops that are part of law firms are subject to bar association rules that prohibit them from representing two clients with competing interests on an issue. Even lobbyists who aren’t lawyers avoid that because it would be bad for business.

Michael Heaney, a research fellow at the University of Glasgow, says with their wider networks, bipartisan lobby shops have a better sense of what members of Congress are thinking. And since information is power in Washington, they can put a higher price tag on that.

Heaney co-authored a study that found from 2008 to 2016, bipartisan firms took in about 20% more revenue per lobbyist than Republican firms. And about 37% more than Democratic ones. They’re still the most profitable lobby shops in Washington today.

Right now, we’re waiting for the results of tightly contested runoff elections for two Georgia Senate seats next month. But even if Democrats won both seats they’d still have a razor-thin majority in the Senate, forcing them to work with Republicans.

Sheila Krumholtz heads the Center for Responsive Politics. She says the incoming Biden administration could be open to some deal-making with congressional Republicans.

“Biden has telegraphed the notion that he would be seeking bipartisan buy-in on legislative proposals,” she said.

Krumholz says that means there will be plenty of demand for bipartisan lobbying, with lobby firms that straddle the aisle well-positioned to pick up clients over the next few years.