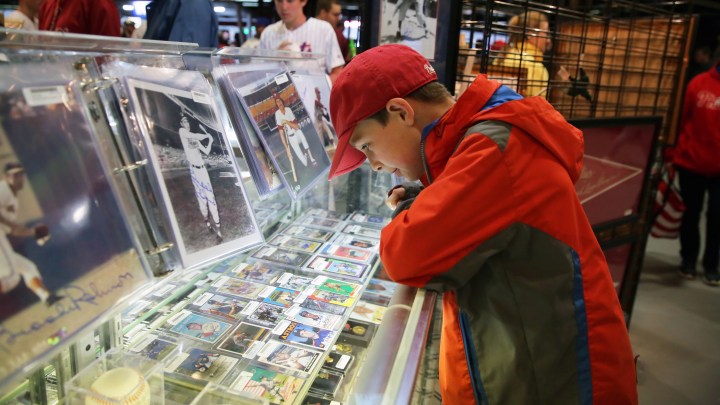 COPY
A boy looks at a display of baseball cards at the Citizens Bank Park in Philadelphia in 2018. Hunter Martin/Getty Images
COVID-19

A boy looks at a display of baseball cards at the Citizens Bank Park in Philadelphia in 2018. Hunter Martin/Getty Images
Listen Now

If you are of a certain age, you might remember the joy of buying, collecting and trading sports cards. It used to be a popular hobby, then fell out of favor. But now, apparently, it’s back.

It turns out this is yet another unexpected side effect of the pandemic, and as more people are collecting, the value of certain cards is skyrocketing.

Ken Goldin, a collectible card auctioneer, remembers auctioning off a 2009 autographed Mike Trout baseball card in May. In case you don’t know, Trout is a center fielder for the Los Angeles Angels, three-time American League most valuable player and a seven-time winner of the Silver Slugger Award.

At the time it was a record for the highest-priced modern trading card. Goldin said he’s since broken that record seven times.

According to the site Sports Collectors Daily, compared to last year, baseball card sales were up more than 50% on eBay March through May.

If you factor in “that everyone has been cooped up back home and longing for the good old days, and you make for a very special market moment,” List added.

But can it last? Card collecting was popular in the ’80s and ’90s. What happened then is a case study in supply and demand.

“the manufacturers back then really overproduced the product, which basically devalued it,” explained Jason Howarth, the vice president of marketing of Panini America, the world’s largest sports and collectibles company. “You know, trading cards are built on scarcity. The value is in the scarcity.”

He said that since then manufacturers have learned their lesson, so maybe this is a winning streak that will continue even after the pandemic. 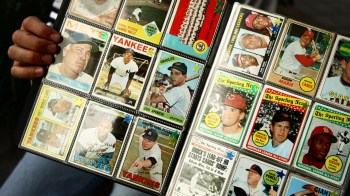