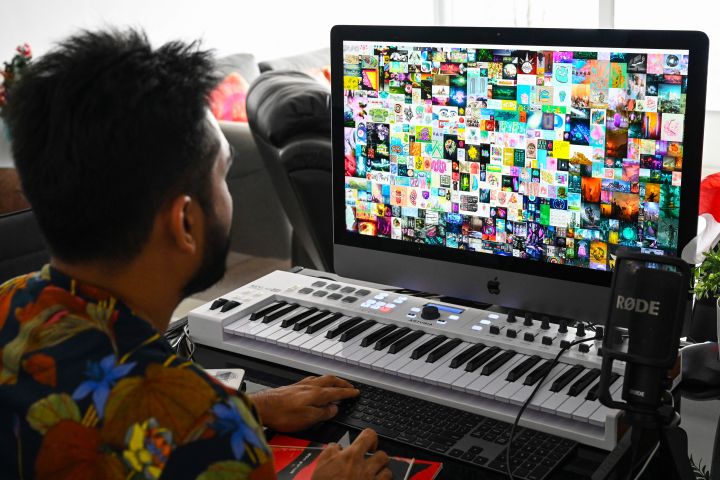 A year ago this week, a JPEG file containing a collage of digital illustrations by the artist known as Beeple sold for $69.3 million at an art auction — setting a new record for the sale of exclusively digital art, and among the highest auction prices fetched for a living artists’ work. Anyone can view the image, “Everydays — The First 5000 Days,” for free online, but the buyer was paying for the work’s non-fungible token, or NFT — its certificate of authenticity on the blockchain.

In the year since the sale, hype around NFTs has become staggering, and some $44 billion has been spent on around 6 million NFTs. But what has this all meant for the art world?

“There’s all this talk about ‘NFT art’ or ‘NFT video’ or ‘NFT tunes.’ But in fact, when you scratch the surface a little bit, it turns out there is no such thing as NFT art,” said art critic Blake Gopnik, who wrote about the issue for the New York Times.

“The kind of images that get NFTs attached to it are mostly, from the point of view of a serious art critic, pretty trivial.”

Gopnik spoke to Marketplace’s David Brancaccio about what’s changed in the year since the landmark Beeple sale and what it means for artists. The following is an edited transcript of their conversation.

David Brancaccio: A year ago, you and I were talking and we’d say, “NFT,” and it was like I was speaking particle physics — like saying “relativistic string dynamics quantization.” Now every cool kid wants an NFT, right?

Blake Gopnik: Yeah, they think they want an NFT, but the weird thing is that people still don’t actually know what NFTs are. It kind of shocks me that they have completely fictional notions of what an NFT is.

Brancaccio: Yeah, it’s interesting. I initially wondered if they were a license to print money. What have you found?

Gopnik: They’re definitely a license to print money. I also think they’re a license to be something close to fraudulent. There’s all this talk about “NFT art” or “NFT video” or “NFT tunes.” But in fact, when you scratch the surface a little bit, it turns out there is no such thing as NFT art. Repeat after me: There is no such thing as NFT art. There’s just these things called NFTs, and they’re certificates. They’re certificates of ownership — almost like a receipt you get in the store that says, “You own this.” And you can attach it to anything. You can attach it to a lousy sentimental illustration by the late Thomas Kinkade, or to a radical conceptual art piece by Hans Haacke. There is no limit to the kinds of things you can attach an NFT to, so there is no such thing as NFT art. If someone says, “Look, I’ve got this amazing NFT illustration to sell to you,” you have to say, “No, no, no, what you’re selling me is a certificate, and that can be attached to anything. You’re not selling me a work of art.”

Brancaccio: So should we see this as maybe a bubble that’s inflated? And bubbles tend to pop.

Gopnik: It’s a bubble for people like you who are interested in the market and economics. For an art critic like me, or for anyone whose main interest is in art, it’s not even a bubble — it tells us nothing, really, about art at all. The kind of images that get NFTs attached to it are mostly, from the point of view of a serious art critic, pretty trivial. It reminds me of when I was a little kid, like 5 or 6, and I would watch baseball and I’d see a pop-up. And I think, “Whoa, that is great. Isn’t that beautiful? Look at the ball soar through the air, higher than I could ever hit it.” And I’d be stunned that that was considered a bad move, because I didn’t understand the game. I had no exposure to it. That’s what’s going on with so-called NFT art — people making kind of lame images — but because they’ve never actually thought about what a really sophisticated move is in art, they think that the art equivalent of a pop-up is an amazing move.

Brancaccio: But if you’re a digital artist, there’s the problem of what’s the real one, what’s the first one, what are copies. And there was a thought that maybe this technique through NFTs could help digital artists make a little more money.

Gopnik: You know, it looked as though NFTs might help serious digital artists make more money. But what really has turned out to be the situation is that NFTs are not about the image that has been NFTed; they’re about the NFT itself. It’s about collecting. Imagine if you’re collecting baseball cards. You get a 1916 Babe Ruth. You’re not collecting it because of the picture of Babe Ruth on the baseball card, you’re collecting it just because it’s a collectible. Imagine if you found a misprint of a 1916 Babe Ruth baseball card that didn’t have his picture on it at all — that would be worth even more. So this is just about collecting for the sake of collecting. It’s about the collectability of NFTs — it has almost nothing to do with the actual image or tuner video that the NFT is attached to.

Brancaccio: By the way, you used a nice, simple metaphor and your Times piece to explain an NFT. I’d say it’s a hard-to-fake digital certificate of authenticity, but you used just one syllable.

Gopnik: Yeah, I think NFTs are deeds, like the deeds you have to your house. And the deed doesn’t tell you anything much about the house; it says that you own it. But owning the deed to even the greatest house in the world, owning the deed to Versailles, does not mean that you have access to Versailles. So imagine someone collecting deeds on eBay — just the deeds, just the piece of paper. That doesn’t mean that they have any access to the house. It doesn’t even mean that they care about the Frank Lloyd Wright or the Eames house. They just want the deed. That’s what NFTs are all about. It’s about collecting deeds to works of art — it’s not about the works of art themselves.