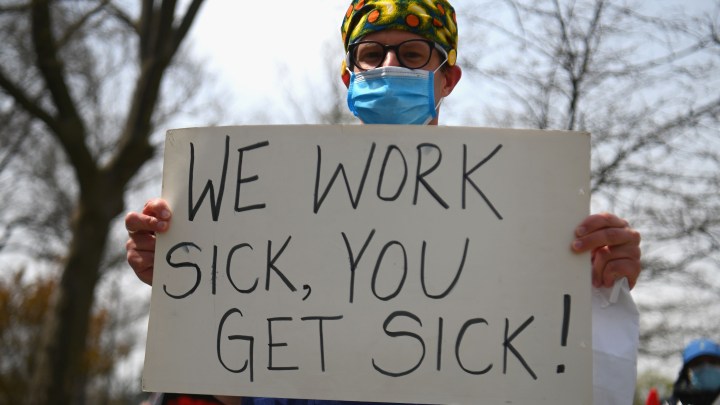 The U.S. set another record for new COVID-19 cases in a single day Wednesday: more than 100,000. Fourteen states recorded record numbers of people hospitalized with the virus.

There are a number of things we know by now that make a big difference in reducing the spread of COVID-19 — wearing masks, washing our hands, social distancing. And paid sick leave.

The United States does not. Which often means people end up going to work sick, said Ruth Milkman, a labor sociologist at the City University of New York.

“People are forced to choose between making a living and protecting their own health and that of their families,” she said. “And, often, they choose to make a living.”

Which is not great when you’re trying to control the spread of a highly contagious virus. So in March, Congress and the White House approved two weeks of emergency paid sick leave for COVID-related reasons.

In the 38 states that did not already mandate some kind of paid sick leave, a new study shows the law made a big difference.

“We saw 400 fewer cases per day” in each of those states, said Nicolas Ziebarth, one of the authors of the study and an economist at Cornell University. He said the effect of the new law adds up to about 15,000 fewer cases per day nationwide, “because workers in some states could now, for the first time, take paid sick leave.”

That’s even though the law “essentially left out 106 million workers nationwide,” said Pronita Gupta, director of job quality at the advocacy group the Center for Law and Social Policy. She said the emergency sick leave policy does not apply to companies with more than 500 employees. A lot of smaller companies have been able to get exemptions, and a lot of workers who are covered don’t know it.

The law will expire at the end of December, and Gupta said if Congress doesn’t extend it, “you’re going to see the spread of contagion. As the nation tries to recover and tries to reopen, it’ll continue to hamper that reopening — and it’ll have long-term impacts,” Gupta said.

Impacts on people’s health and well-being, she said, and on the nation’s economy.