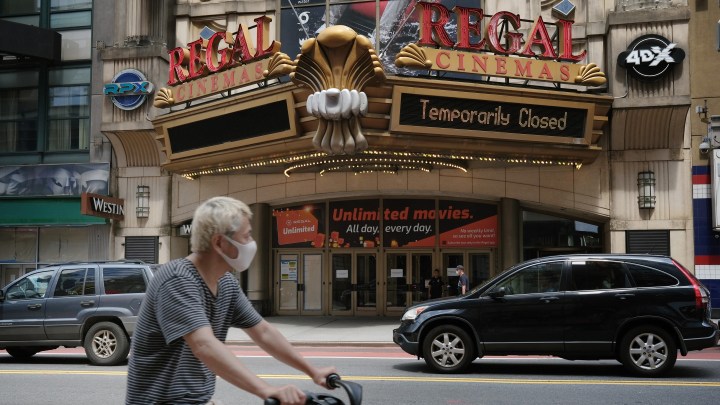 Over the weekend, Cineworld — which Americans know as Regal Cinemas — announced closures of its U.K. and U.S. theaters.

Cineworld has said it’s a temporary move. But many in the film industry wonder: Without new blockbuster films to show, and with once again rising COVID-19 infection rates, how much longer can movie theaters possibly survive?

You could call it a chronicle of a death foretold. For months now there have been warning signs that many theaters will have to shut down. The anti-hero in this story? Bond, James Bond. And we won’t be getting to it until next year. On Friday, MGM announced the release of Bond’s new movie is being postponed until 2021.

That was pretty much the last-standing big blockbuster for this year.

Shortly after, Cineworld announced temporary closures in the U.K. and the U.S. That’s 40,000 jobs at risk in the U.S.

Michelle Greenwald, a professor with the Columbia Business School, said the theater closures will also hit nearby coffee shops, restaurants, ice cream parlors — all of which are likely to suffer if screens stay dark.

And with Cineworld closing its Regal theaters here in the U.S., other theater chains may soon close too, said USC professor Gene Del Vecchio.

“Without content, and being so dependent on content, it was simply a matter of time before theaters were going to run into trouble, and there’s no light at the end of the tunnel,” Del Vecchio said.

But while things are looking bleak for cinemas, he said, Hollywood could be just fine without them. Premiering on streaming services, like Disney did with “Mulan,” is paying off so far during the pandemic.

Straight to video used to be almost an insult. These days, it might just be the only way to do business.