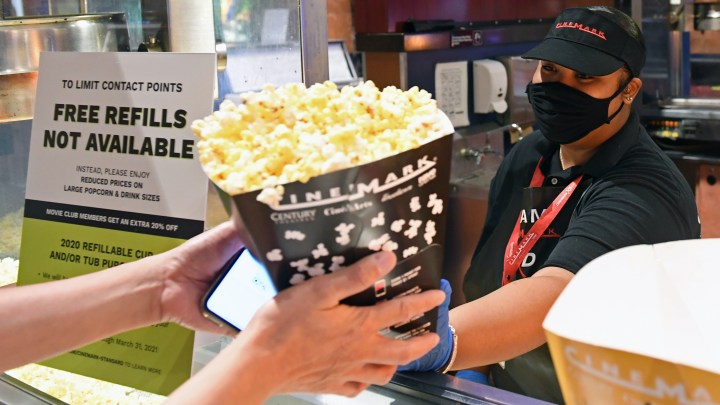 It’s been about a year since COVID-19 shut down movie theaters across the country. Now, with infection rates decreasing and vaccination rates increasing, theaters are slowly but surely reopening.

Are you ready for a movie and the smell of extra butter? Maybe some overpriced candy and soda? Not so fast.

Audiences will still be required to wear masks, which will make snacking hard, and some theaters have even banned snacks.

For struggling cinemas, that’s a problem because a huge chunk of their profits comes from the concession stand.

This 1957 movie trailer for snacks says it all. Going to the movies has always been partly about eating.

Popcorn. Jujyfruits. Junior Mints. Snacks are about 40% of a movie theater’s revenue, according to New York University professor Charles Schreger, who focuses on the business of entertainment.

“Theaters make money by your buying a ticket. And then they have to give a lot of that money, usually about 50%, back to the studios. So it’s a relatively low-margin business. They make this huge profit margin on selling you popcorn,” Schreger said.

San Francisco has outright banned food and drinks in theaters. But will people even want to eat at the movies?

Former moviegoer Jose Hernandez in Los Angeles said it’s a no for him.

“Having to, like, pull your mask down to eat your popcorn and soda, it’s not the same. It’s just … it’s just not time yet.”

The days of sitting in the dark shoving nachos into your mouth while crying to Ryan Gosling are no where near back. At the IFC Center, a movie theater in New York where John Vanco is senior vice president, they are only allowed to fill a quarter of their seats and have decided no snacks or drinks.

“It makes things a little more challenging to not be selling concessions,” Vanco said. “Twenty-five percent seating capacity is a real challenge, too. But honestly, it’s a lot better than 0% capacity, which is what we were stuck at for 51 weeks,” he said.

Vanco said they see this as a phase.