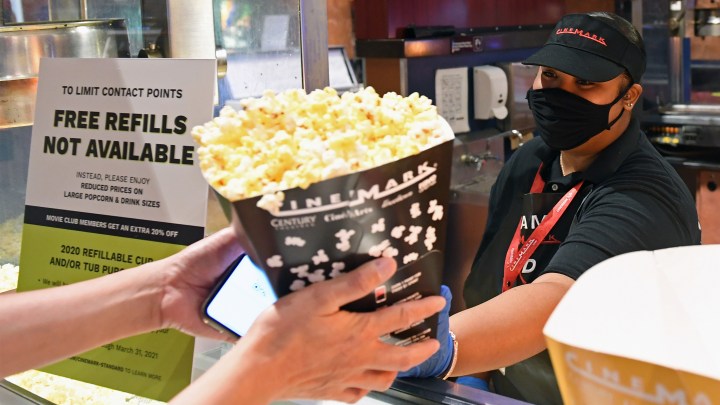 Movie theaters are reopening in states across the country, which is good news for brands like AMC and Regal, who’ve been hard hit by the pandemic.

Theaters are promising heightened hygiene, capped capacity and better ventilation. But will audiences go for it?

Pretty soon, Shannon Faye Gallegos will boldly go where almost no man has gone … for the last five months or so: the movie theater. She lives in Texas, and now that theaters are reopening, she’s ready.

“I have to live. So I need to see what’s in the theater, and I want a big bucket of popcorn,” she said, laughing.

Movie theaters have been suffering. Last quarter, AMC lost over half a billion dollars.

Now, those big chains are hoping there are more people out there like Gallegos. But that doesn’t solve the other big issue: what to show.

“If you look at the long term, we will not have content coming out soon because content is completely closed down,” said Arun Sharma, a professor of marketing at the University of Miami. “So we will suddenly have this imbalance of having theaters but no content.”

Many theaters will be showing older titles. The new Russell Crowe movie, “Unhinged,” is widely considered a test case for the reopening. And in September, there’s “Tenet,” a much-awaited sci-fi thriller the industry is pinning its hopes on.

Paul Dergarabedian, a senior media analyst at Comscore, a media analytics company, said what cinemas are showing will only be part of the appeal.

“It’s not gonna be about how good is the movie?” he said. “It’s going to be more about, are there protocols for health and safety in place?”

“In this time it just seems like an unnecessary risk,” said Brianna Stimpson in New Jersey. She said watching a movie is one of the easiest things to recreate at home. “It’s not a bar, it’s not a concert. It’s just sitting there and watching a movie.”

Like many, she’s ready to dip her hand in a popcorn bag … but, in the safety of her home.