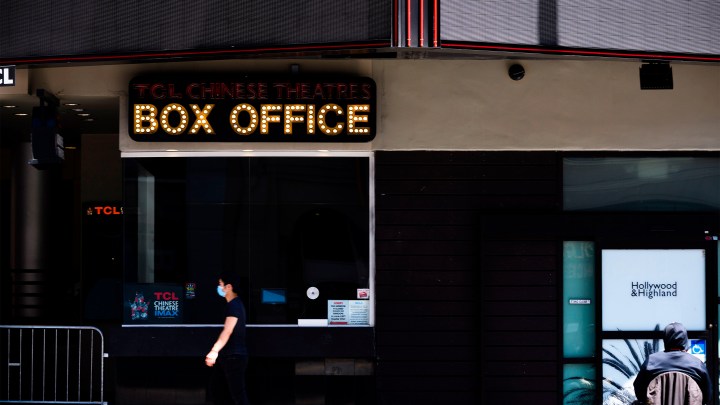 COPY
Will movie theatres see the same rebound after quarantine as they did after the Great Depression? Robyn Beck/AFP via Getty Images
COVID-19

Will movie theatres see the same rebound after quarantine as they did after the Great Depression? Robyn Beck/AFP via Getty Images
Listen Now

Just because movie theaters are closed, doesn’t mean you can’t find drama there.

Universal — the studio behind “Minions” and “Jurassic Park” — are in a fight with some of the biggest theater chains in the country: AMC and Regal. It’s a new twist on an old Hollywood debate: When things get back to normal, will movies still play on the big screen before you can watch them at home?

It all started with a bunch of trolls. The animated kind. Usually, movie theaters play films for a few months. After, you can rent that movie online.

But COVID-19 shut movie theaters down. Studios pushed some movies straight to streaming, like Universal’s “Trolls World Tour.” And it reportedly made over $100 million — a hit.

With millions of Americans quarantining with their kids, of course they paid 20 bucks to rent “Trolls,” said Mike Hodel, an analyst with Morningstar.

“I don’t think you can prove anything with the ‘Trolls’ release and the success of that, but I do think it gives the studios some increased confidence that they can evolve how they go to market over time,” Hodel said.

Confidence enough for Universal to talk about a future where movies may get released in theaters and online at the same time. Movie theater chains were not happy about that. They’re worried fewer people will visit when they can just watch a movie at home instead.

So AMC retaliated by banning all Universal movies from its chain. Regal said it would only show movies that are big-screen exclusives. None of the companies replied to our requests for comment.

Studios get a bigger cut from digital releases than in-person tickets, so losing out on a family’s worth of box office sales may still make sense for studios like Universal.

“There’s something about a theater,” said Arun Sharma, marketing professor at University of Miami. “There’s lots of folks who love to take their families to the theater, especially for movies which will have large audiences.”

Like Universal’s now-postponed “F9,” the latest in the “Fast & Furious” franchise. People who love seeing Vin Diesel’s muscles in IMAX 3D can’t do that at home.

Because after months stuck at home streaming, that big screen might look more appealing than ever.