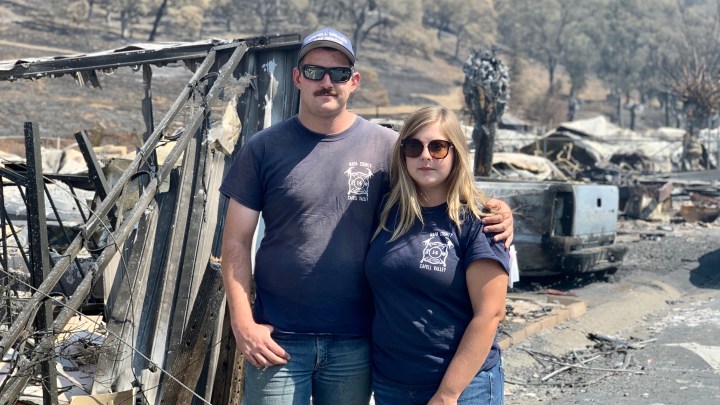 Brandon North stepped through ash that was his home.

“Somewhere over here in this concrete pad, there’s footprints from my baby brother,” he said.

He picked up a warped piece of metal. A cloud of ash settled into the imprints of two tiny feet.

A stone’s throw away, Becca Brown-Dehner stepped over a twisted bird cage on her family’s property.

“This was my twin brother’s room, but now that’s all gone,” she said.

These were their childhood homes, destroyed last month when wildfire struck California’s wine country. As Brown-Dehner surveyed the rubble, her lower lip quivered. North hugged her. They’ve been dating since high school.

“We would always go over to his house … play board games. Our families are really close … so we did a lot of movie nights, camping trips,” she said.

Now the young couple lives together 10 minutes up the road where they’re campground hosts. About a month ago, they were asleep when a lightning storm exploded.

“I’m terrified of lightning,” Brown-Dehner said. “So I was just kind of videotaping it, and I woke him up and I was just recording it.”

“The radio started going crazy. We did have a couple small fires start,” North said.

North and Brown-Dehner are volunteer firefighters, but this was the first time she was sent to work a fire. By the afternoon, the small fires had turned into infernos.

“Seeing fire for the first time like that,” she said. “I was terrified.”

Walls of flame a hundred feet high swept over ridges. Brown-Dehner was assigned to an engine. North was sent to the front lines.

Firefighters are battling some 90 blazes along the West Coast. Many of the men and women on the front lines are volunteers who hold down day jobs and respond to emergencies in their local communities. Two-thirds of the nation’s firefighters are volunteers, according to a study of local and municipal fire departments by the National Fire Protection Association.

“So I was excited because I like fighting fire,” North said. “But then when it started to get into housing areas and stuff, the excitement went away and more of anger started to set in, I guess.”

Especially the next night when flames swept into the mobile home park where he and Brown-Dehner grew up. North raced to their parents’ neighborhood to help.

“It was hard seeing this place burning down and just trying to do my job at the same time. When I came here, everything was fully engulfed,” he said.

After everyone escaped — including their parents — North called Brown-Dehner to tell her their families’ homes were gone.

“My heart broke. And I just felt devastated and hopeless. I didn’t know. But really to do,” she said.

North returned and found Brown-Dehner sobbing. He knelt on his knee and held her hand. In his pocket, he had a diamond ring. He had grabbed it to make sure it didn’t burn. He wasn’t planning on popping the question right then and there, but he thought it would make her feel better.

“Finally, he asked me to marry him!” she said.

The couple did not have time to dwell on the engagement, with so many fires still burning. For now, they are focused on helping their parents and neighbors.

Brown-Dehner wondered if it might be time to leave the area, but North shook his head. Napa is his home. As a firefighter, North also said he feels a sense of duty.

“I guess a callous way of saying it is, ‘This where the action is so it’s where I want to be,’” he said.

Once the fires subside, the pair looks forward to finding a time to celebrate their engagement.