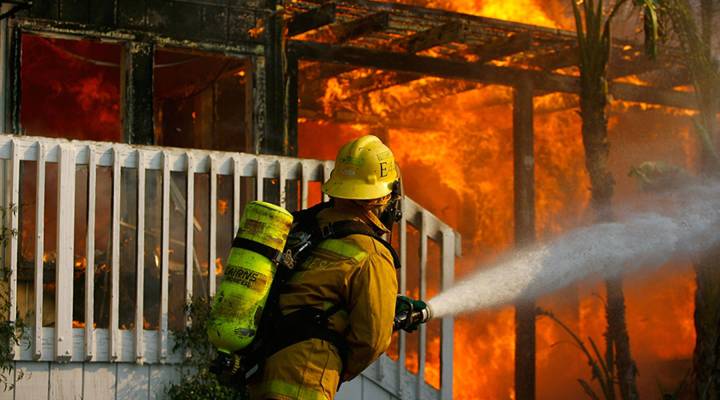 COPY
A U.S. forestry firefighter cools a burning home to protect a nearby structure in Deerhorn Valley near Jamul, California, in 2007. David McNew/Getty Images

A U.S. forestry firefighter cools a burning home to protect a nearby structure in Deerhorn Valley near Jamul, California, in 2007. David McNew/Getty Images
Listen Now

Jon Trapp was a wolf biologist in the Rocky Mountains. He was always in the field and he wanted to spend more time with his family. Twelve years ago, a job opened up at his local fire department in Red Lodge, Montana, and he took it with the promise that he would be home every night.

In the beginning, Trapp, now 47, did stay close to home. But as he gained more experience, he would help fight big wildfires wherever he was needed. Now there are so many big fires, Trapp is away from home more than he was during his days as a wolf biologist.

“It’s hard,” he said. “And I try to front load all my family activities [in the] the first part of the summer before the fire season really gets into full swing.”

That’s getting harder as fire season stretches out. When asked if he would have chosen this line of work had he known he’d be away so much, he said: “I don’t think so. Yeah, I don’t think so. I’m in a good place right now where I’m trying to find that balance. But I think for a majority of firefighters that’s a very difficult balance to find,” he said.

It’s difficult because of the increase in catastrophic wildfires.

Wildfires are natural. But a combination of factors including drought, advances in fire suppression and climate change are creating monster blazes that can quickly engulf thousands of acres and take weeks to contain. In California, for example, there were more than 1,000 wildfires in July alone — more than three times the average. And California isn’t the only state with big fires to fight. The demands on firefighters have never been greater.

“Imagine you’re running a race,” said Randy Brooks, a forester who teaches fire science at the University of Idaho. “Years ago it was a 100-meter dash. Now we’re running a marathon. And imagine how much more energy it takes to run that marathon versus that 100-meter dash.”

Brooks said firefighters can work 16-hour days in heavy gear, often not getting enough food, water or sleep during those shifts for months on end. Some are contract workers and go where the money is. With hazard and overtime pay, there can be a lot of it. Others, like Jon Trapp, work for fire departments that have mutual aid agreements with other departments. Those fighters are sent where the need is.

That can create problems back home, said Rick Robinson, chief for the Oceanside Fire Department in Southern California.

“It’s very difficult for me to send a lot of resources out on mutual aid assignments because I can’t cover my home turf,” he said. The firefighters left behind end up working longer, harder shifts, which makes it hard to hire. At the moment, Robinson is down seven people in his department, and a few of his people are in Montana, fighting those fires. But mutual aid is still the best system they have. Last year, when Oceanside was hit with a catastrophic fire, the department turned to other towns for equipment and manpower, and the help was there.