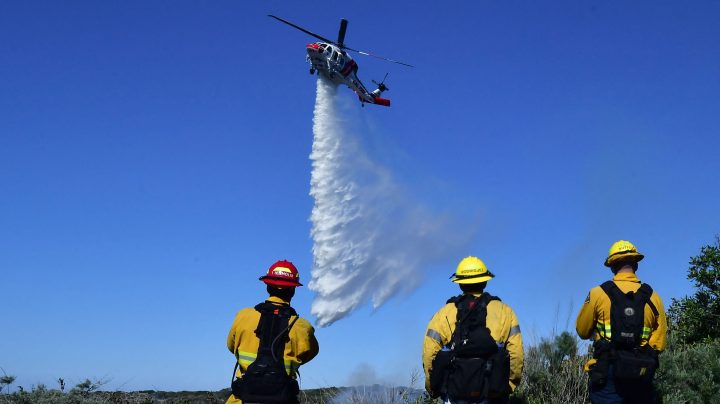 COPY
Many firefighters have sounded alarms about crews and forests being critically short-staffed, even as they prepare for what is expected to be another challenging summer. Frederic J. Brown/AFP via Getty Images

Many firefighters have sounded alarms about crews and forests being critically short-staffed, even as they prepare for what is expected to be another challenging summer. Frederic J. Brown/AFP via Getty Images
Listen Now

The U.S. Forest Service is short thousands of wildland firefighters as it enters what is expected to be another challenging fire season amid a historic drought in the West.

The agency has publicly said it has 90% of the staff it needs, or 10,200 firefighters. But Forest Service Deputy Chief Jaelith Hall-Rivera told Marketplace that that figure was the sum of the firefighters the agency had “either on board or have made offers to.”

But as of the end of April, the agency actually had 8,300 firefighters on its force ready to battle what have become increasingly ferocious infernos made worse by climate change, according to Andrew Avitt, a Forest Service spokesman. That is only 73% of the force the agency has said it was on track to marshal to battle this year’s fires.

A $600 million pay raise approved by Congress, which might have helped the agency’s recruitment and retention efforts, has been stuck for months in bureaucratic morass as various parts of the government figure out how to implement the raises.

The raises were for 50% of firefighters’ salaries or $20,000, whichever is less. Firefighters have yet to see a cent of it.

Meanwhile, federal firefighters, who battle fires in national forests, rangelands and other federally owned properties, are quitting in large numbers, while a broad, nationwide labor shortage is making it more difficult to recruit replacements.

Anecdotally, firefighters have reported that some crews and forests are short as much as 50% of their required staff, a number confirmed by the agency’s chief, Randy Moore.

“It’s as low as 50% in some areas,” Moore told a Senate hearing last Wednesday. “We are making offers. There’s a lot of declinations in those offers,” Moore said.

“When you have counties, states and private [agencies] offering sometimes double the salary that the Forest Service firefighters are making, it is very hard to compete with that.”

The Forest Service has another 1,900 applicants in various stages of the hiring process, according to spokesman Avitt. That includes applicants who have been offered jobs and those who have accepted offers and are going through background checks.

As in other years, the agency plans to supplement its firefighting force by calling on trained workers from other parts of its organization and on retirees.

But the Interior and Agriculture departments, which both employ wildland firefighters, are struggling with how to implement the raise — approved in the bipartisan infrastructure bill enacted in November — and are trying to resolve a host of questions.

Jeff Rupert, director of the Interior Department’s Office of Wildland Fire, said those questions include “how we implement compensation increase, how it affects their retirement, how it affects the premium pay that they receive when they’re deployed to an incident.”

Rupert said his agency has hired all of the firefighters it needs for this year.

Officials are also trying to figure out whether the pay raises are to be implemented uniformly across the nation or specifically tied to regions of the country where competing wages are the highest and recruitment and retention the most difficult.

That dilemma arose because of a provision in the infrastructure law, which says raises should go to firefighters in geographic areas where “it is difficult to recruit or retain a Federal wildland firefighter.”

But a Senate source with knowledge of the bill-writing process told Marketplace that many lawmakers expected the pay raises would simply apply to the entire nation.

The difference between what was intended and the delays in implementation are compounding frustrations in Congress.

As wildland firefighters wait, they are watching their paychecks lose real value amid rising inflation, and their ranks dwindle as more colleagues go to better paying agencies or leave the profession altogether.

These are not a new problems. An internal Forest Service document obtained by Marketplace shows that in the agency’s Region 5, which includes California, there were about 350 resignations in 2021, in the same year the agency hired nearly 1,500 firefighters.

“To get a 15-year-experienced veteran on our crews takes 15 years,” Martin said. “And when people don’t have that experience, it’s very difficult to then put them in extreme situations.”

Many firefighters have sounded alarms about crews and forests being critically short-staffed, even as they prepare for what is expected to be another challenging summer.

A report from the National Interagency Fire Center forecast “above normal significant fire potential” for May through August for several parts of the country, while much of the West struggles with a historic drought.

“It’s very hard to keep your chin up in the face of everything that’s going on,” said Ben Strahan, who leads a crew of federal firefighters.

Firefighters have said that they have had to do more with less as wildfires grow larger and their ranks shrink. Strahan said an area of fire that might have once had several crews and other resources now is more likely to be left in the hands of one crew of 20 specially trained firefighters known as “hotshots.”

These challenges, and low pay that leaves firefighters and their families struggling financially, are leading to physical and mental exhaustion, Strahan said.