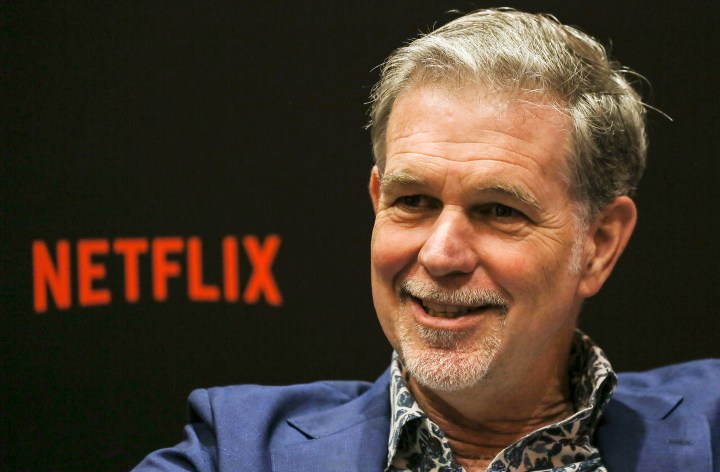 COPY
"The threats that get you are the substitution threats," Netflix's co-founder and CEO said. Ore Huiying/Getty Images for Netflix
Corner Office

"The threats that get you are the substitution threats," Netflix's co-founder and CEO said. Ore Huiying/Getty Images for Netflix
Listen Now

In 1997, Reed Hastings and Marc Randolph co-founded an online movie rental company called Netflix. Today, it’s a globally influential entertainment company with close to 200 million subscribers around the world. “Marketplace” host Kai Ryssdal spoke with Hastings about competition in the new era of streaming, Netflix’s company culture and the book he co-wrote called “No Rules Rules: Netflix and the Culture of Reinvention.” The following is an edited transcript of their conversation. Click here to read an excerpt from the book.

Kai Ryssdal: I read somewhere as I was preparing for this talk that you have said you knew back in like 1996-97, in the days of red envelopes and DVDs going out, you knew that this is where this company was going to wind up — delivering nonlinear television or content over the internet. Is that true?

Reed Hastings: How lucky can one person get? In 1986, I got a job serving coffee as a first job in a computer company. And it happened to be the very first dot com ever. And in that company, I learned so much about the internet, that by the time we started Netflix in 1997, I realized the internet was going to continue to get faster and faster and eventually be able to do television. And so yes, we knew and DVD was a temporary option for us, and it worked very well.

Ryssdal: Yeah, clearly it did, I would say so. Much has been written and said about how much money this company spends on getting those new shows and new content, and I wonder, of the things that keep you up at night running this globally influential company, where does the amount of money you have to shell out for content rank?

Hastings: You know, [we’ll be] spending this year about $15 billion developing new content, so it is quite a lot, and we’re very thankful that then our subscribers watch all of our content and then, you know, send us 10 bucks a month to be able to fund even more content development.

Ryssdal: But the beautiful part it seems to me, of Netflix and honestly your competitors as well, but let’s talk about you, is that it yes, it’s great to have the hits, right, like “The Crown” and all the rest of them, but it almost doesn’t matter because you have unlimited airtime. You can keep it in the back catalog, and people keep coming back for it, and that seems like a great luxury and competitive advantage.

Hastings: You know, the internet has that infinite shelf space aspect that makes it able to support really broad selection, and so that’s what empowers us to have a huge variety of shows, depending on whatever country you live in.

Ryssdal: Can we talk for a second about this book that you’ve written? And I want to dig into it in the way I think you intended it to be read, which is a discussion of yes, Netflix, but also how you run this company and the company culture. It is famously described as — “cutthroat” is probably pejorative, but it’s harsh and does not tolerate second-rate performers. And you’ve been really candid about it, right? I mean, you released the whole PowerPoint deck on it eight or 10 years ago, you’re writing a book about it now. Do you worry that Netflix, for all of its successes, suffers from its reputation as a really difficult place to work?

Hastings: If you look at the employee satisfaction studies, we rank at the very top. People who work at Netflix love it. It may not be for everyone, but for 300 years, people have built companies to be like factories — very top down, very efficiency oriented. And now there’s a lot of creative work, where instead of supervising employees, which is the factory way, we look to get them to create new concepts. We manage on the edge of chaos, but the benefit of that is great creativity, which is what’s helped us adapt from the DVD era forward.

Ryssdal: Who gets to decide in this company? I mean, you famously took on Ted Sarandos, who used to be chief content guy, and he’s now the co-CEO with you. Who makes the decisions in this company?

Hastings: So a perfect quarter for me would be a quarter where I’ve made no decisions. I’ve only influenced people, I’ve advocated, I’ve inspired, I’ve learned. We don’t do by command, that’s sort of the factory era, we do by influence.

Ryssdal: I’m so interested in this factory-era comparison, because yes, we’re transitioning to a knowledge economy and things are changing and creators now are so important, but it can’t work everywhere in this economy, right?

Hastings: Correct. Any part of the economy that’s around mass replication with very little variance, like creating antibiotics, things that are safety critical, like airlines and hospitals, you want to be very process-oriented. Then there’s what used to be a very small sector of the economy — the creative sector —  but now growing, where it’s fundamentally about ideas, and generating stimulating human creativity.

Ryssdal: Last thing and then I’ll let you go, and it gets us back to the beginning of this conversation where you, as first mover in the space, took out Blockbuster, right? Who are you worried about? Who’s your competition? Are you worried about getting Netflixed, I guess?

Hastings: YouTube, TikTok, augmented reality. I think we’ll do pretty well against Disney and HBO. We’re all going to be in it for a long time. The threats that get you are often the substitution threats, the things that you really didn’t spend a lot of time on, and so those are the ones that we worry about in the long term.