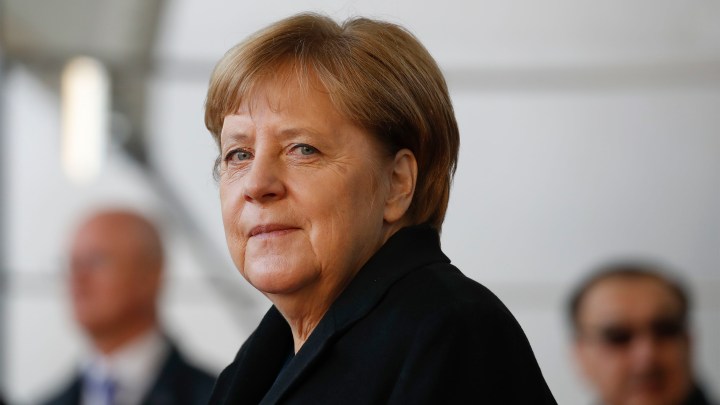 COPY
After 15 years as Germany's top leader, Angela Merkel is set to end her tenure next year. Odd Andersen/AFP via Getty Images

After 15 years as Germany's top leader, Angela Merkel is set to end her tenure next year. Odd Andersen/AFP via Getty Images
Listen Now

Many world leaders have seen their approval ratings slump over their handling of the coronavirus crisis. But not German Chancellor Angela Merkel.

Merkel is enjoying a powerful upsurge in popularity at home, partly because of what many Germans see as her calm and effective management of the crisis. Germany’s death rate from the disease is significantly lower than that of other large European countries: less than a quarter than that of France, less than a fifth than that of Britain, Spain and Italy.

If Germany’s outperformance continues into the new year, it should provide an ideal swan song for Merkel, who, after 15 years in power, is due to retire from the top job in German politics next year.

Before she leaves the stage, Marketplace has been assessing — with the help of four leading German economists — the achievements of the European Union’s longest-serving leader and considering the challenges facing her country after her departure.

The chancellor’s current, sky-high approval rating is not only due to her relative success in containing COVID-19. She has also been widely applauded at home for minimizing the economic fallout from the pandemic.

“Confidence among consumers and companies is stronger than in many other European countries,” said professor Marcel Fratzscher, head of Germany’s leading economic research institute DIW. “I think overall, Merkel’s government has handled the crisis quite well from an economic perspective.”

In spite of her usually tightfisted approach to public spending, Merkel pumped some $1.2 trillion into protecting workers and companies, and that has helped buoy confidence and prevent unemployment spiraling out of control.

Even before the pandemic, her economic scorecard looked quite impressive, said professor Michael Wohlgemuth, who teaches economics at the University of Witten/Herdecke.

“Overall, the 15 Merkel years were rather good years for the German economy, especially when compared to most of our neighbors,” said Wohlgemuth.

While French and Italian living standards have either stagnated or fallen, Germans are on average 20% better off than when Merkel came to power.  But Wohlgemuth does not give Merkel all the credit.

“It’s not governments that produce wealth and jobs, but workers and entrepreneurs,” he said. “Global demand and exchange rates are important factors, too.”

Certainly many voters didn’t reward Merkel for the buoyant German economy at the last general election three years ago. She only just survived in office. Her popularity had plummeted as a result of her highly controversial decision two years earlier to allow more than a million Syrian refugees and other migrants into the country.

Professor Gustav Horn from the University of Duisburg-Essen, a senior figure in the center-left SPD party, said Merkel had not done enough to allay German fears over the influx.

“Many people felt very insecure by such a mass of people entering in such a short period of time. In a way she did the right thing, but she did not explain it properly to the people,” Horn said.

By failing to soothe people’s anxieties, Horn maintains that Merkel allowed the hard right Alternative for Deutschland (AFD) party to gain a major foothold in the German parliament. “The AFD  were promising to send the refugees home, and that appealed to many voters,” he said.

Today a lot of the overt anti-immigrant feeling has subsided, and Fratzscher of the DIW said the process of integrating those 1 million newcomers is well underway.

“Almost half of the refugees who have come have jobs now or are in training. The children are very well integrated,” he said.

However, that integration isn’t reflected so well in the refugees’ earnings,   which on average are 45% less than those of German workers. Wohlgemuth, while agreeing that Merkel was right on humanitarian grounds to let the migrants in, believes that it could take a generation for them to be fully integrated into German economic and social life.

Other critics of Merkel’s 15-year tenure focus on the physical fabric of Germany under her stewardship.

“In terms of the infrastructure, if you look at the roads and the bridges, the condition is often quite poor,” said Stefan Legge, a German-born lecturer in economics at the University of St. Gallen in Switzerland.

“We read the other day that just 1 in 10 bridges in Germany is in a good condition. The public train system is a running joke — if it’s running at all. It’s often late. It’s not what it used to be,” Legge said.

He also accused Merkel of failing to improve the state of Germany’s digital and communications infrastructure.

“It’s so bad that the economy minister publicly announced that he won’t take any phone calls when he’s away from the office because he constantly has dropped calls,” he said. On Merkel’s watch, Germany, Europe’s economic superpower, has failed to create a tech giant capable of competing with the titans of Silicon Valley.

Merkel’s role as the most powerful leader in the 27-nation European Union gets mixed reviews. Horn of the University of Duisburg-Essen says that Merkel damaged the cause of closer economic and political convergence within the bloc by her hard-hearted refusal in the early stages of the eurozone debt crisis to help Greece with cash transfers. But he believes she redeemed herself this summer by championing the 750 billion euro EU Recovery Fund aimed at helping the EU member states hardest hit by the pandemic. The fund — to which Germany is the largest contributor — is widely seen as an important step on the road to closer European integration. “We have made significant progress in Europe,” Horn said.

None of the four economists that Marketplace consulted said that Merkel’s leadership over the past 15 years had been ineffective overall or below par. Fratzscher at the DIW was the most complimentary.

“My hunch is that when people look back on Angela Merkel’s chancellorship, they will say her most important legacy and achievement is the transformation of Germany into an open society,” Fratzscher said. “A society that is open-minded towards foreigners, towards people with different sexual orientations and more equitable towards women.”

And even her sternest critic among the four economists, Legge of the University of St. Gallen, said her failure to radically restructure the German economy is, at least, understandable.

“It’s much easier to implement tough reforms when things are not going too well,” he said. “Maybe the situation in Germany has been too good to implement reforms.”

Germany’s economy grew by over a third during her  tenure — one and a half times the growth rate of its nearest EU rival, France.

Over her 15 years at the top, Merkel has survived at least four major economic crises. A model perhaps for wannabe political leaders, male and female, everywhere.

“Overall, I would say Germany could have done far worse electing someone else to office,” Legge said. “And I think a lot of voters in other countries wish they had spent the last 15 years under Angela Markel rather than some other politicians.”