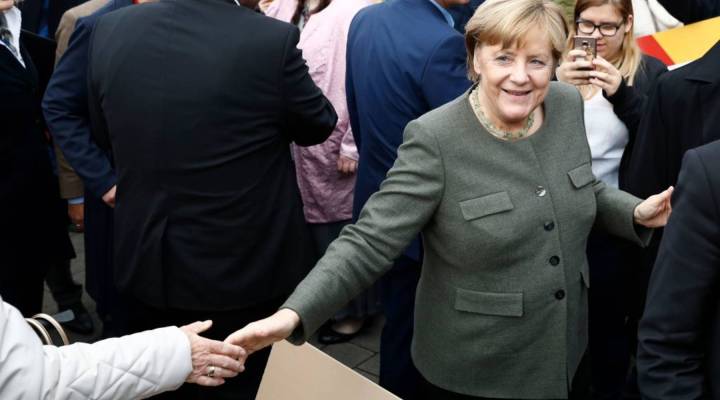 German Chancellor Angela Merkel — if the opinion polls are to be believed — is on course for an easy win in her country’s general election on Sunday. Merkel has made an extraordinary political comeback. A year ago, she was on the ropes. Her approval rating had plummeted in the aftermath of her decision, in 2015, to open the door to more than a million Syrian refugees and other migrants. But, on the eve of the election, many of her supporters appear to have forgiven her.

“She’s done some things right and some things wrong,” Sigmar Holm told Marketplace at a pro-Merkel rally in northeastern Germany.

“It evens out. She comes across well. She’s likeable. We need someone like her. Not people who just talk nonsense,” he said.

Germany’s buoyant economy has helped Merkel’s political recovery. Unemployment is less than 4 percent, exports are booming and the budget deficits, which have plagued many of the southern countries in the Eurozone, are non-existent in Germany. Merkel has kept her government’s budget in surplus for five years.

“As long as the Germans say: ‘the economy runs good, my situation is good,’ the benefit goes to the governing party — Merkel and the ruling conservatives,” said Gero Neugebauer, a political scientist at Berlin’s Free University.

And given the country’s ever-present Nazi past, Merkel’s unassuming, slightly dull, demeanor is an additional asset.

“Some people are still afraid that too much charisma could lead to too much leadership and the present leadership shown by Merkel is enough,” Neugebauer said.

That is not say that some Germans do not relish the fiery, high-profile, right-wing rhetoric of the Alternative for Deutschland Party and its radical policies. AfD supporters — like Holger Klein — are still enraged about Merkel’s open door migration policy.

“Another four years of Merkel will be a disaster, a catastrophe. She’s given the migrants a load of money. What do we Germans get?” Klein said.

Support for the anti-immigrant, anti-euro AfD dropped from 15 percent last year to single figures, but in the final weeks of the campaign — according to some opinion polls — it has rebounded. How to explain the relative popularity of the AfD in a country which has such a powerful reaction against right-wing politics? One metric might help. The lowest-paid 40 percent of German workers earn less in real terms than 20 years ago. In other words, despite its booming economy, Germany has its own cohort of “left behind” citizens.

The AfD is still only a marginal force but opinion polls suggest it could, after Sunday’s election, become the first far-right party to get into the German parliament since World War II. It’s a dark streak of populism and economic discontent to cloud Chancellor Merkel’s sunny horizon.