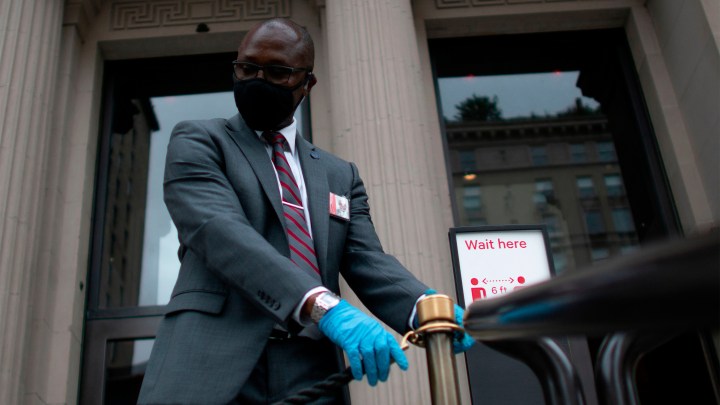 COPY
An employee at the newly reopened Metropolitan Museum of Art in New York. With unemployment widespread, many people who have kept their jobs are worried about losing them. Kena Betancur/AFP via Getty Images
COVID & Unemployment

An employee at the newly reopened Metropolitan Museum of Art in New York. With unemployment widespread, many people who have kept their jobs are worried about losing them. Kena Betancur/AFP via Getty Images
Listen Now

We talk a lot about what the pandemic is doing to the economy — how it’s showing up in the jobs numbers, in retail sales, bankruptcies, you name it. But there’s another part of it which is how the economy feels — how it makes us feel.

But are those worries justified?

If almost a third of people are worried about losing their job or having their hours cut, you have to figure the other two-thirds aren’t.

They’re like Josh Stamps, an aerospace engineer in Lakewood, Colorado.

“Even though my household is in a really good position, I’m concerned about just about everybody I know outside of my house,” he said.

Then there’s the 27% who are worried. They’re worried about what happened to Brett Hulverson in Davenport, Florida.

“To this day, I’m still looking for a job,” he said, and that’s not a situation he thought he’d ever be in.

Hulverson had steady work in the entertainment industry. Then he was furloughed, then laid off. He had plenty of time to chat about his worries as he and his wife waited in the car line at a food bank.

“This has been kind of our Tuesday ritual, if you will, for the past couple months now,” he said.

“I’ve definitely had some of these same worries and uncertainties myself, and then thinking through what, what happens if I do lose my job? Where, where do we go from there?” said Jenn Trivedi, who teaches anthropology and studies disasters at the University of Delaware.

She said her job is probably safe for now, but her worry reveals something about the way we process information.

“We think about things like risk and uncertainty,” Trivedi said. “Not only through what we experienced directly ourselves, but what we see other people, especially other people who are like us, experiencing and going through.”

And more people like us — all of us — are suffering in the pandemic.