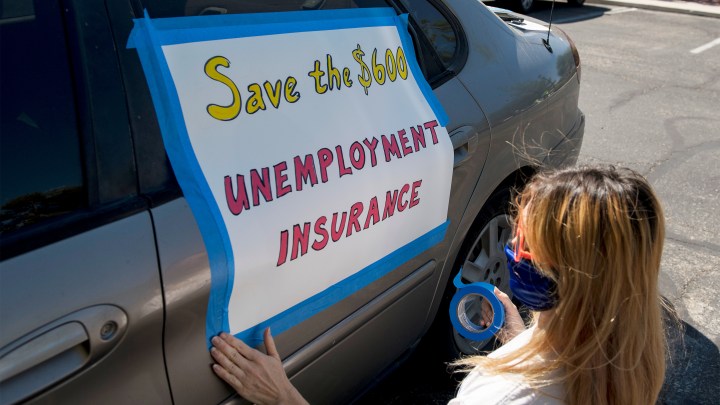 Personal incomes are up, but it won’t last

COPY
An activist in Las Vegas tapes a sign to her car in support of extending the $600 weekly unemployment benefit, which expired at the end of July. Bridget Bennett/AFP via Getty Images
COVID & Unemployment

Personal incomes are up, but it won’t last

An activist in Las Vegas tapes a sign to her car in support of extending the $600 weekly unemployment benefit, which expired at the end of July. Bridget Bennett/AFP via Getty Images
Listen Now

We got another snapshot of what the recovery looks like Friday in data from the Bureau of Economic Analysis over at the Commerce Department: Personal spending is up 1.9%. Also up unexpectedly, personal incomes — up about four-tenths of a percent.

But keep in mind, these numbers are from July, at the end of which the extra $600 a week in unemployment insurance ran out.

According to the Commerce Department, that increase in personal incomes is a sign that more of the economy is starting to reopen.

Daniel Keum, an assistant professor of management at Columbia Business School, points out that personal income has two components.

“One is the salary people receive from working. The other one is the social insurance programs, and that part is actually going down,” he said.

In other words, less money in unemployment benefits. We’ll see the full impact of that when August numbers come out. Keum said people who relied on that extra money to pay their bills will feel it, and business owners will, too.

“The expiration of the social insurance programs and UI provides them with sort of a demarcation line. OK, this is a good time for me to actually open my business back up and call people back,” he said.

Some recipients will be getting extra benefits again soon by way of funds President Donald Trump is diverting from disaster relief. Veronique de Rugy, senior research fellow at the Mercatus Center, said people in dozens of states are likely to get that extra $300 per week. A few states are already sending out bigger checks.

“Effectively what it means is for unemployed people who were counting on it, it’s just basically a reduction of half of the bonus part, which is not half of the benefits,” de Rugy said. “But so for them, it’s going to make a difference.”

For as long as that money lasts, analysts say that might only be a few weeks.