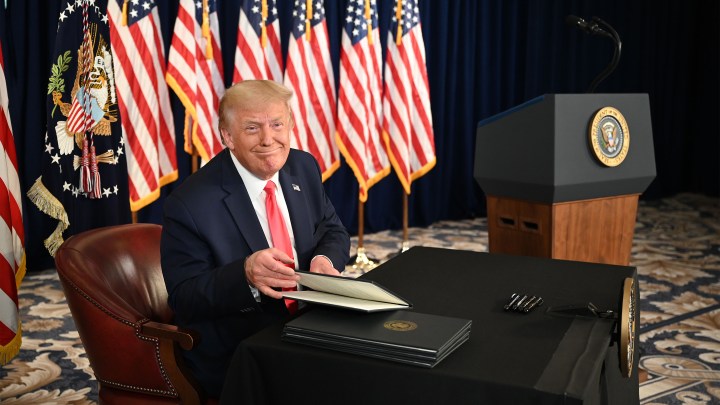 It’s been a little over two weeks since President Donald Trump signed a bunch of “executive memorandums” — one of which was supposed to get the federal government back into the business of topping up unemployment benefits, to $400 a week.

Right now, only two states — Arizona and Texas — are paying the new benefit the president promised. Or at least, part of it. They’re paying $300 of the $400 a week Trump called for.

“So it looks like states are trying to get this money out the door,” Evermore said. “But for the most part, I think it’s going to take states quite a while to get this up and running.”

States have to set up new online application systems and find new funding for the $100 a week that’s their responsibility.

But so far, only Kentucky, West Virginia and Montana plan to pony up. So in most states, recipients would get a $300-a-week top-up.

Michael Strain, director of economic policy studies at the American Enterprise Institute, said that wouldn’t be so bad, assuming the money goes out soon. He said the original $600 payment was more than many people earned while working.

“There’s very good reason to believe that continuing unemployment benefits that are that generous would keep people out of the workforce,” Strain said.

The expiration of the $600 benefit means consumers have had about $70 billion less in their pockets since the end of July. Mark Hamrick, senior economic analyst at Bankrate.com, said that means “the economy will not be rebounding to the same extent as it would have otherwise. And we know that this rebound is quite precarious.”

One more potential glitch here: The money for the president’s new program comes from FEMA’s disaster funding, with wildfires ravaging California and two big storms heading for the Gulf Coast.