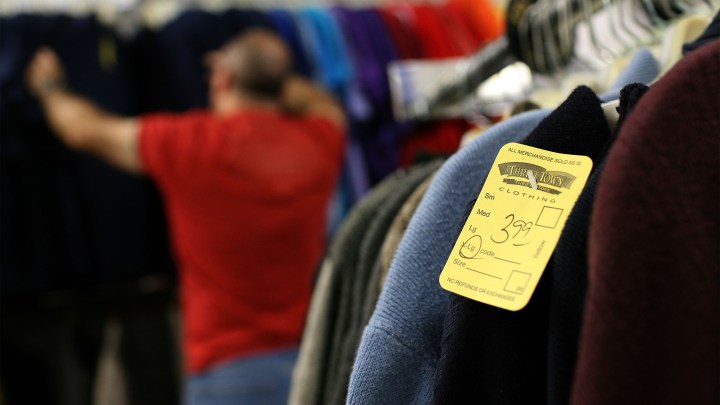 COPY
Tagged clothing at a thrift store in San Francisco. Justin Sullivan/Getty Images
How We Shop

Let’s talk about your purchasing decisions. Maybe you pinch pennies or you’re an emotional shopper. Maybe you’ve gone on a shopping fast. What we buy — and how we buy it — often says something about our values. The latest installment of our series, How We Shop, is about a woman in Columbus, Ohio, who buys almost everything secondhand: kitchen utensils, couches, bathing suits and even her cat’s litter box.

Savannah Ward used to hate thrift stores. When she was a kid, her mom would buy almost everything secondhand.

Savannah, who’s 26, remembers when they would go to church and people would ask her mom where she got her outfits. Her mom, Krisanne, would tell them proudly.

“They would give little side remarks, kind of look at her weird, kind of like the oh, OK, that’s interesting,” Savannah said.

When Savannah was a teenager and needed sports gear, like kneepads and soccer cleats, her mom wanted to get those secondhand, too.

Her mom remembers too.

“Yeah, she got a little upset about it,” Krisanne Ward said.

Krisanne said she gets a thrill from hunting for treasures at thrift stores, but it’s also about saving money — something that was lost on Savannah at the time.

“You know kids. When they’re younger, they always want the best and it doesn’t last very long, and they don’t understand the value of a dollar. But as adults, we do,” she said.

Things changed when Savannah had to pay for her own clothes, though. “She was like, oh — now I know what my mom was doing,” Krisanne said.

In high school, Savannah couldn’t afford what all her friends were wearing: Marc Jacobs and J.Crew and Chanel. So she started thrifting in secret.

One time, she found a Chanel necklace on eBay, possibly a fake, for $6. “No one knew that I was hunting on eBay, and I was bidding, you know, like all night just so I could fit in with the crowd,” Savannah said.

That’s how Savannah got hooked on thrift shopping — because of high school peer pressure.

Then in college, during a women’s studies class, Savannah’s professor asked her and the other students to look at the tags on their shirts.

“Every single person, it said: Made in Bangladesh or Made in China,” she said.

She learned that those clothes are often made under sweatshop conditions, with low wages and safety hazards that lead to fires and building collapses like the one at a Bangladesh clothing factory in 2013 that killed more than 1,100 people.

She later learned about the environmental impact of fast fashion, like how much clothing ends up in landfills.

She started shopping almost exclusively secondhand, this time as a statement of her values.

Then she turned it into a side business. She started reselling thrifted earrings and mirrors and high-waisted shorts on Instagram.

“The first day that I decided to do it, I think I posted like 10 items that I thrifted, and they all sold out,” she said.

And that’s where things stood when I talked to Savannah in March.

But the past few months have changed her.

Because of the virus, she’s staying away from thrift stores for now. She doesn’t want to put herself or anyone else at risk. She had some items in storage, and they sold out in seconds.

She has also been changed by the protests around racial justice and economic inequality. She’s gotten a lot of messages on Instagram lately saying it’s not ethical for her to shop at thrift stores because she’s taking items away from people who can’t afford to buy them elsewhere — and then reselling them at a markup.

“Which put me in a really uncomfortable position but also allowed me to grow and, you know, think more deeply about these issues,” Savannah said.

She thinks they have a point. But she also talked to thrift stores and says they told her they have more donations than sales and end up throwing stuff away. She’s torn.

“Does me helping the environment mean I’m taking away from people in poverty? I honestly will never know,” she said. “The thrift stores say no, but people on Instagram say yes.”

She is planning to be more selective about what she resells from thrift stores. Maybe vases and vintage decor are OK, but she’ll stay away from necessities like clothing.

Savannah is trying to shop with her values in mind, and sometimes that’s hard to pull off.