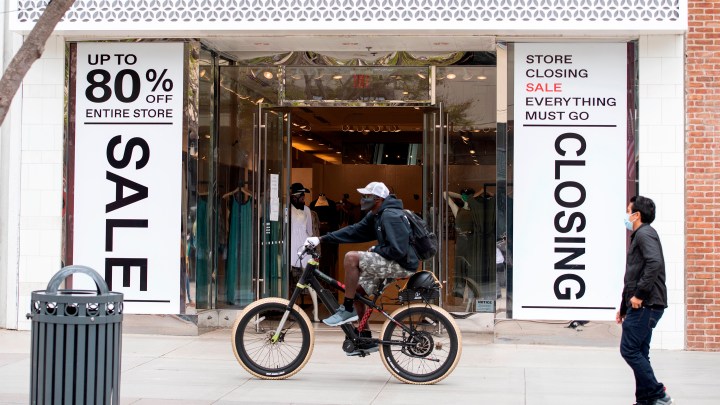 COPY
A shop closing down soon in Santa Monica, California. More businesses are going bankrupt this year in the midst of the coronavirus pandemic. Valerie Macon/AFP via Getty Images
COVID-19

A shop closing down soon in Santa Monica, California. More businesses are going bankrupt this year in the midst of the coronavirus pandemic. Valerie Macon/AFP via Getty Images
Listen Now

Bankruptcies are up so far this year — to a level we haven’t seen since 2010, in the aftermath of the Great Recession. That’s according to S&P Global Market Intelligence, which tracks big-ish public and private companies across the economy. It’s a 27% increase over the same period in 2019.

There are some household names on the list — J.Crew and Neiman Marcus, for instance. But there’s also Fieldwood Energy and Summit Gas in another hard-hit sector.

When the pandemic hit in March, bankruptcies kept ambling along pretty much like in 2019 — slow and steady, said Chris Hudgins, who crunches the numbers at S&P Global Market Intelligence.

“Even into April and May, we were still pretty much what you would expect during the normal course of the year,” he said.

Companies were still managing to pay the bills in the midst of stay-at-home orders. But then, “in June and July we saw this large spike in bankruptcies, which is about a 30% increase,” Hudgins said.

They were concentrated in retail and energy. Now, this analysis covers pretty big companies with millions in assets and liabilities. Small-to-medium-size businesses appear to be doing worse, according to Dan North, an economist at Euler Hermes North America.

“We think for the whole year, business bankruptcies are going to be up around 47%,” he said.

Euler Hermes is in the business of insuring companies for payments they’re expecting — say, from the customers they ship products to. When those customers are late, or in default, North said, it’s often because they’re heading for bankruptcy.

“If you’re Walmart, a large company, you’ve got a buffer,” North said. “The average small business has a 27-day cash buffer. Business gets shut down —27 days to survive.”

As the economy continues to struggle, a lot of small businesses might just throw in the towel. They won’t show up as bankruptcies. They’ll just turn into zombie companies — no employees or sales, not contributing to the economy anymore.