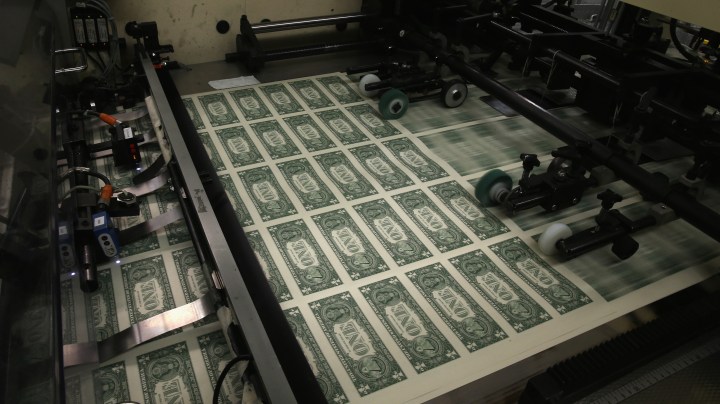 COPY
It won't be easy to knock off the U.S. dollar. When governments save their money, they overwhelmingly save in dollars. Mark Wilson/Getty Images

It won't be easy to knock off the U.S. dollar. When governments save their money, they overwhelmingly save in dollars. Mark Wilson/Getty Images
Listen Now

The U.S. dollar has been on a pretty steady decline ever since the pandemic began and the American economy plunged into recession. As every major currency is rising against the greenback, some financial professionals are asking if the long reign of the dollar as the world’s dominant currency is in question.

Pick a currency, any currency. Chances are, it gained against the U.S. dollar last month: the euro, the yen, the Brazilian real, Mexican peso, Swedish krona, New Zealand dollar. They all rose against the greenback.

Goldman Sachs recently told clients it has “real concerns about the longevity of the U.S. dollar” as a dominant currency. At issue: U.S. leadership in the world economy.

“In the last few years we’ve led the charge in de-globalization, decoupling, trade protectionism, imposition of tariffs,” said Stephen Roach, former chairman of Morgan Stanley and now a fellow at Yale University. “We have absolutely failed in dealing with COVID-19.”

Now the Federal Reserve is keeping interest rates ultra low, meaning almost no payoff for investors buying the dollar. As confidence in the U.S. economy falls, Roach warns the dollar could crash. He predicts a 35% plunge.

“It raises real questions I think about the staying power of the U.S. as a real leader in the global economy,” Roach said.

Enter the European Union as a potential new boss. EU members have flattened their pandemic curves, rebooted their economics and agreed to a long-term stimulus plan.

“After all the talk about the EU potentially imploding, with Brexit, and also there had been fears of a Greek exit, what the EU is telling now to the rest of the world is that EU members want to stay together in the very long term,” said Agathe Demarais, head of global forecasting at The Economist Intelligence Unit.

Could a rising euro nudge aside the dollar? This being economics, there is of course a dissenting view. Those who say no argue the greenback remains the dominant currency used around the world for international transactions. And when governments save their money, they overwhelmingly save in dollars.

As for the euro, the market for buying and selling it may not yet be ready.

“A deep and liquid euro bond market is necessary for the euro to be a viable candidate for taking over the preeminent role of the dollar,” said Catherine Mann, chief global economist for Citi.

Still, in a changing world, the dollar may someday be replaced, just as the British pound yielded to a rising U.S. currency and economy a century ago.

“An easy prediction is that the dollar would not necessarily maintain its dominant role forever,” said Kathryn Dominguez, economics professor at the University of Michigan. “But exactly how that evolves I think it’s very hard to predict.”