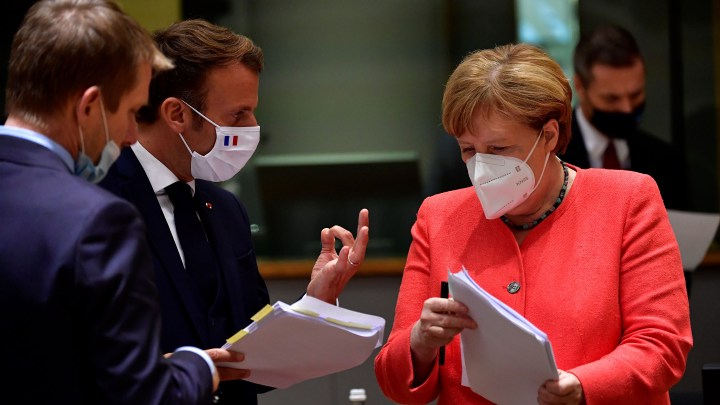 After a marathon four days of at times acrimonious negotiation, European leaders in the early morning hours Tuesday reached a deal on an economic rescue package for EU nations battered by the pandemic.

The BBC’s Victoria Craig spoke with Marketplace’s Sabri Ben-Achour, and the following is an edited transcript of their conversation.

Sabri Ben-Achour: So what did these 27 leaders agree to?

Victoria Craig: Well, they’ve officially signed off on a plan to distribute $850 billion to member countries to help them recover from the impact of shutdowns, loss of tourism and loss of local spending during this coronavirus crisis. And they’ll raise this money through the first-ever collective bond issuance program. Usually the EU prefers member states to raise money individually.

Ben-Achour: One of the big sticking points was whether to loan money to struggling countries or just give those countries money. Why was that such a big deal?

Craig: Well, southern nations like Italy and Spain, which have been badly hit by the coronavirus pandemic, had advocated to get a bigger portion of the overall funding to be distributed through grants. That would have meant that they wouldn’t have to take on extra debt after they’ve already kind of slowly recovered from the eurozone debt crisis from several years ago. The so- called “frugal four” group of nations in the north — those are the Netherlands, Austria, Sweden and Denmark with support from Finland — they wanted more control in how the money is distributed. In the end, leaders agreed to allocate more money in grants than in loans, but the total amount of money that will be distributed in grants is more than $100 billion less than was originally floated back in May. So it was sort of a win-win situation for everyone.