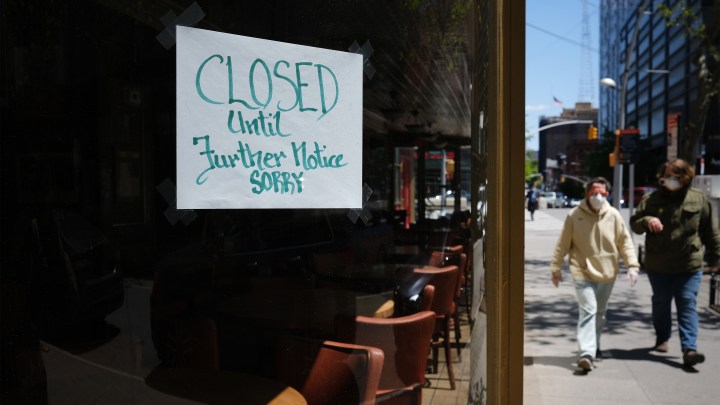 More than 100 current and former corporate CEOs have sent a letter to Congress pushing for a relief package that specifically props up small businesses with loans that go beyond the federal Paycheck Protection Program.

But a lot of the names on the list are actually CEOs of major U.S. corporations, like Starbucks, Walmart, Dunkin’ Donuts and Ulta. Why do such large corporations care about small businesses?

Remember in, like, sixth-grade science class when you learned how every part of the environment is connected?

Say an invasive species of fleas ends up in a lake. And those fleas eat all the plankton. Then the fish starve because they usually eat the plankton. And on and on. Neil Bradley at the U.S. Chamber of Commerce says the economy is kinda like that.

“We think of it as an ecosystem,” he said.

To survive, big retailers need small businesses. They make a lot of the products that we all buy. Think about that when you walk into a big-box store.

“You go back to the sporting goods department, and maybe you’re buying fishing lures to go out and go fishing. You’ll find that many of those things are made by small businesses,” Bradley said. “You go into the crafts department, you’ll find the same thing.”

So if those businesses are closing, retailers might have trouble stocking shelves. Also, small businesses are a large part of the economy — they produce about 44% of U.S. GDP.

“They employ 58.9 million Americans,” said Karen Kerrigan, president and CEO of the Small Business and Entrepreneurship Council. “So, you know, these are people that shop at a lot of these big businesses, these big retailers.”

And if they don’t have jobs, they may be less willing to spend money at Walmart or Ulta.

The CEO letter asks Congress to create a new loan program for small companies that lasts more than a few months. They want it to include at least partial loan forgiveness and target loans to businesses owned by people of color, who’ve traditionally had less access to them.